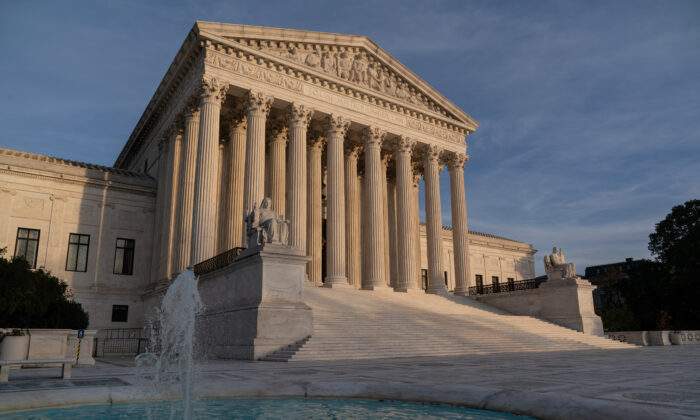 The Supreme Court is seen in Washington on Nov. 5, 2020. (J. Scott Applewhite/AP Photo)
By Matthew Vadum

The Supreme Court on March 8 dismissed former President Donald Trump’s final remaining challenge to the 2020 presidential election results, a lawsuit challenging the results in the state of Wisconsin.

At the same time, the high court also declined to hear an emergency petition for mandamus brought by pro-Trump lawyer L. Lin Wood, who, on Dec. 30, 2020, asked the court to block the Jan. 5 runoff elections for Georgia’s two U.S. Senate seats. The races were won by Democrats who unseated two incumbent Republicans, handing control of that chamber to Democrats as President Joe Biden began his term of office.

The court, as is its custom when refusing to hear petitions, didn’t explain its actions. No justices indicated they were dissenting from the dismissal orders.

In the case at hand, Trump v. Wisconsin Elections Commission, court file 20-883, Trump argued in a petition filed Dec. 30, 2020, that the commission violated the U.S. Constitution when it established rules for mail-in voting without the consent of the state legislature. In the petition, Trump sought to appeal an unfavorable Dec. 24, 2020, ruling by the U.S. Court of Appeals for the 7th Circuit.

For example, in June 2020, the Democratic mayors of Madison, Milwaukee, Racine, Kenosha, and Green Bay filed a grant request with a nonprofit called Center for Tech and Civic Life (CTCL), regarding the “Wisconsin Safe Voting Plan 2020.” The plan applied only to the five cities and “attempted to leverage private funding, unauthorized by the Wisconsin Legislature or any federal entity, to bring about mass absentee voting to favor Democrats.”

The mayors received the full $6.3 million they sought from CTCL, which was heavily funded by Facebook CEO Mark Zuckerberg, the petition stated.

“CTCL funding not only paid for programs which undermined state election law and allowed municipalities to circumvent clear policies of the Legislature, it also injected partisan politics into these illegal practices,” by sending funds to Democratic strongholds, including for drop boxes for the return of absentee ballots, the petition stated.

In the petition, Trump challenged the rules under the Equal Protection Clause of the 14th Amendment and the Electors Clause in Article II of the U.S. Constitution, which gives state legislatures control over how each state’s presidential electors are appointed.

Later, after Biden was certified by Congress as the winner in Wisconsin and inaugurated as president, Trump filed a supplemental brief on Feb. 9, saying the issues at hand were still relevant because they would affect future elections, including any in which he might again seek office. Moreover, Trump argued, those who violated the law in Wisconsin and elsewhere by altering voting procedures at the 11th hour needed a deterrent to discourage future bad behavior.

These events “have mooted aspects of the relief initially sought by Petitioner,” yet “key issues are not moot based on the ‘capable of repetition yet evading review’ doctrine.”

“The exception applies where ‘(1) the challenged action is in its duration too short to be fully litigated prior to cessation or expiration, and (2) there is a reasonable expectation that the same complaining party will be subject to the same action again,’” the brief stated, citing Supreme Court precedents.

“The narrow window in which legal disputes may be resolved following a presidential election weighs heavily in favor of applying the ‘capable of repetition’ doctrine to resolve issues capable of reoccurring. Otherwise, non-legislative state actors may be emboldened in future presidential elections to make even more last-minute changes to state election laws contrary to the Electors Clause than occurred in this year’s election.”

The dismissal on March 8 came after the Supreme Court threw out a series of legal challenges on Feb. 22 to voting processes and results in several states left over from the recent presidential election cycle, as The Epoch Times previously reported.

Those cases concerned the presidential elections held in the battleground states of Arizona, Georgia, Michigan, Pennsylvania, and Wisconsin.