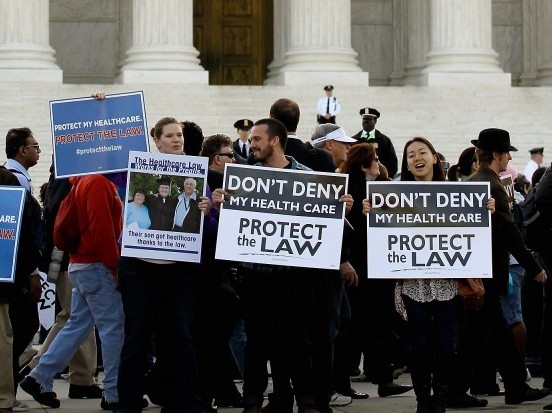 Demonstrators for and against the Patient Protection and Affordable Care Act march and chant in outside the U.S. Supreme Court Building on March 26, 2012 in Washington, DC. Today the high court, which has set aside six hours over three days, will hear arguments over the constitutionality of the act. (Chip Somodevilla/Getty Images)
US

WASHINGTON—The Supreme Court on Monday began consideration of the constitutional challenges to the Patient Protection and Affordability Care Act—commonly known as the Affordable Care Act (ACA)—sending the signal that the high court will move forward with a ruling on the controversial health care reform law.

While both opponents and supporters wait with anticipation over just how the court will rule on the requirement that by 2014 nearly everyone must acquire health insurance, Monday’s activity involved an 89-minute discussion that often dipped into arcane legalities regarding the tax code.

In hearing arguments over four key provisions of Obamacare, the court must first decide whether the Anti-Injunction Act (AIA) of 1867 applies to the individual mandate provision of the ACA.

The argument was that the ACA’s individual mandate and its associated penalty might be construed as a form of taxation. The AIA prohibits individuals from suing against a tax law before it takes effect, because that would mean the suit was blocking the IRS from collecting taxes. Interrupting the collection of tax revenues is intolerable for an efficiently running federal government that needs revenues to carry out the will of the people.

As Justice Stephen Breyer said today, “Taxes are, for better or for worse, the life’s blood of government.”

If the AIA applies, then the first challenge to the individual mandate wouldn’t take place until after 2014. Both sides want to see the ACA’s constitutionality resolved now and not ‘kick the can down the road.’ Initially, the Obama administration argued that the AIA invalidated challenges to the individual mandate, but abandoned that argument when district court judges continually rejected the argument.

With neither the plaintiffs nor government wanting to argue the AIA angle, the Supreme Court appointed outside counsel, Washington attorney Robert Long Jr., to make the case.

By the exchanges, the justices did not seem persuaded by Long’s arguments.

Justice Antonin Scalia started off, saying that the concerns over challenges to collecting revenue would not flood the courts. “You have to exhaust administrative remedies; even after you pay the tax, you can’t immediately go to court. You have to go to the secretary and give the secretary at least six months to see if the matter can be resolved administratively. The taxpayer is never allowed to rush into court.”

Despite the argument otherwise, the justices did not appear concerned over suggestions that a wave of lawsuits would emerge if the AIA were dismissed. They also seem persuaded that the health care act mandate, or its penalty, was not a tax and that the statute was non-jurisdictional in its text and structure. Even if jurisdictional, it doesn’t prevent lawsuits from going forward.

Justice Sonia Sotomayor asked, “Assuming we find that this is not jurisdictional, what is the parade of horribles that you see occurring if we call this a mandatory claim processing rule [i.e., not a tax]?”

The question whether AIA had jurisdiction, as Long argued, eventually became a moot point: If it has jurisdiction on the individual mandate, exceptions can be made; if it has no jurisdiction—as the justices seem inclined to accept—then the consequences are not so dire.

The justices looked to passage of the Affordable Care Act itself, examining how Congress’s intent in the Act related to the AIA. “This is not a revenue-raising measure, because if it’s successful, they won’t—nobody will pay the penalty and there will be no revenue to raise,” Justice Ruth Bader Ginsburg said.

Lyle Denniston, a legal journalist who has reported on the Supreme Court for 52 years, observed: “As the argument moved along, Long’s argument seemed to lose more and more of its force with the justices, and he appeared to have persuaded no one on the bench of his furthest argument—that the AIA was a total bar.”

A two-hour hearing on the individual mandate is scheduled for Tuesday at 10 a.m. In all likelihood, the high court will, without further delay, take up the issue that everyone wants to see decided.