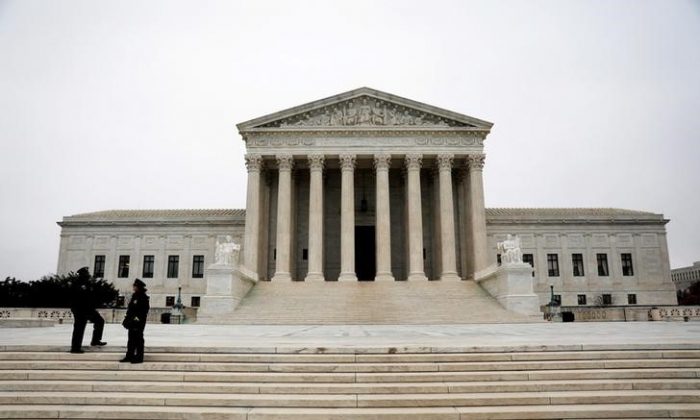 The Supreme Court in Washington on April 7, 2017. (REUTERS/Aaron P. Bernstein)
US

Supreme Court May Limit Where Companies Can Be Sued

WASHINGTON—The Supreme Court on Tuesday appeared poised to clamp down on where corporations can be sued, a potential setback for plaintiffs’ lawyers who strive to bring cases in courts and locales they consider friendly.

Companies and plaintiffs are engaged in a fight over where lawsuits seeking financial compensation for injuries should be filed. Companies typically can be sued in a state where they are headquartered or incorporated, as well as where they have significant ties. They want to curtail plaintiffs’ ability to “shop” for courts in states with laws conducive to such lawsuits.

Bristol-Myers was appealing a California Supreme Court ruling allowing that state’s courts to hear claims related to its blood-thinning medication Plavix even though most plaintiffs do not live in the state and the company is not based there.

Based on questions asked during the argument, the court’s conservative majority appeared to side with the companies’ view while its liberals wondered how it would be unfair to add out-of-state claims to a case that would proceed anyway.

Conservative Justice Anthony Kennedy expressed skepticism over California handling matters for residents of all other states.

If suits involving out-of-state residents can be handled in every state, conservative Chief Justice John Roberts added, “I don’t see that it increases the efficiency at all.”

‘All of the Above’

Liberal Justice Elena Kagan suggested Bristol-Myers did not want to face multiple trials in California specifically because of plaintiff-friendly juries or the possibility of punitive damages.

“All of the above,” the company’s lawyer Neal Katyal said, adding that it is harder to get cases thrown out of court before trial in California.

The California Supreme Court ruled in August 2016 that it could preside over the Plavix case because Bristol-Myers Squibb conducted a national marketing campaign and sold nearly $1 billion of the drug in the state. Bristol-Myers is incorporated in Delaware and headquartered in New York.

The justices also appeared to be leaning toward Texas-based railroad BNSF. The company is appealing a 2015 Montana Supreme Court ruling allowing out-of-state residents to sue there over injuries occurring anywhere in BNSF’s nationwide network.

The case focused on a federal law concerning railroads, but Roberts seemed skeptical that a ruling siding with the plaintiffs would be limited to that context.

Roberts wondered whether other companies operating in multiple states including airlines and trucking companies could similarly be sued in states where they operate but are not based.

“How do you decide what other companies and industries are at home in Montana?” Roberts asked the plaintiffs’ lawyer.

Rulings in both cases are due by the end of June.

In an unusual twist, Justice Stephen Breyer’s cellphone rang shortly after the Bristol-Myers argument began, which he scrambled to turn off. Members of the public are forbidden from bringing electronic devices into the court’s chamber. A court spokeswoman called Breyer’s cellphone ringing an “oversight.”