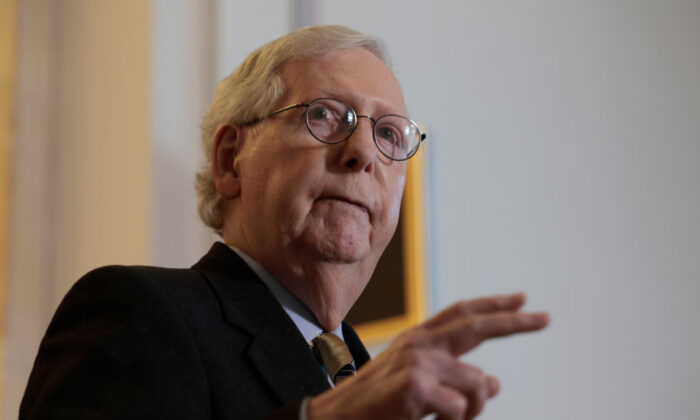 Senate Minority Leader Mitch McConnell (R-Ky.) decried the unknown leaker of a majority Supreme Court (SCOTUS) decision that would overturn Roe v. Wade, and demanded that the perpetrator be found and punished for the breach.

In a story first reported by Politico, it was revealed to the public that SCOTUS had decided by a 5–4 majority vote to overturn the standards for abortion laid out in Roe v. Wade, which has long been a cultural rallying point for both pro-life and pro-abortion activists.

“Last night’s stunning breach was an attack on the independence of the Supreme Court,” McConnell wrote in a statement shared on Twitter. “By every indication, this was yet another escalation in the radical left’s ongoing campaign to bully and intimidate federal judges and substitute mob rule for the rule of law.”

“We do not know whether this draft is genuine, or whether it reflects the final decision of the Court,” the White House said in a statement.

But assuming the statement is true, Biden continued, “a woman’s right to choose is fundamental, Roe has been the law of the land for almost fifty years, and basic fairness and the stability of our law demand that it not be overturned.”

“[If] the Court does overturn Roe, it will fall on our nation’s elected officials at all levels of government to protect a woman’s right to choose. And it will fall on voters to elect pro-choice officials this November. At the federal level, we will need more pro-choice Senators and a pro-choice majority in the House to adopt legislation that codifies Roe, which I will work to pass and sign into law.

“We will be ready when any ruling is issued.”

“If the report is accurate, the Supreme Court is poised to inflict the greatest restriction of rights in the past fifty years—not just on women but on all Americans,” Schumer and Pelosi wrote in a joint statement. “The Republican-appointed Justices’ reported votes to overturn Roe v. Wade would go down as an abomination, one of the worst and most damaging decisions in modern history.”

In his own statement, McConnell decried Democrats’ focus on the content of the decision rather than on the unprecedented breach of confidence by the leaker, and demanded further investigation and punishment of the one responsible.

“The disgraceful statements by President Biden, Speaker Pelosi, and Leader Schumer refuse to defend judicial independence and the rule of law and instead play into this toxic spectacle,” McConnell said. “Real leaders should defend the Court’s independence unconditionally.”

“This lawless action should be investigated and punished as fully as possible,” he continued. “The Chief Justice must get to the bottom of it and the Department of Justice must pursue criminal charges if applicable.

“All nine Justices should tune out the bad-faith noise and feel totally free to do their jobs, following the facts and the law where they lead,” McConnell concluded.

Shortly after McConnell’s statement, Chief Justice John Roberts issued a statement calling the leak a “betrayal” and said that the matter would be investigated.

“To the extent this betrayal of the confidences of the Court was intended to undermine the integrity of our operations,” Roberts wrote, “it will not succeed,” adding that the “work of the Court will not be affected in any way.”

Roberts also said he directed the Marshal of the Supreme Court to carry out an investigation into the leak and the individual who leaked it to the press. Should the leaker be identified, it’s not clear what punitive actions will be taken against them, although Roberts said the leak could be considered a significant breach of trust.

Minutes after the documents leaked on May 2, Sen. Josh Hawley (R-Mo.) expressed similar sentiments to McConnell’s but went a step further, saying that the leak was part of a left-wing effort to pressure the court into changing course.

Although the court had not confirmed the authenticity of the draft opinion at the time, Hawley told Fox News during a May 2 appearance: “I have to tell you—it sounds real to me.”

The leak, Hawley added, “is plainly an attempt by the left to try and change the outcome in this case and corrupt the process, and the court must not allow that to happen.”