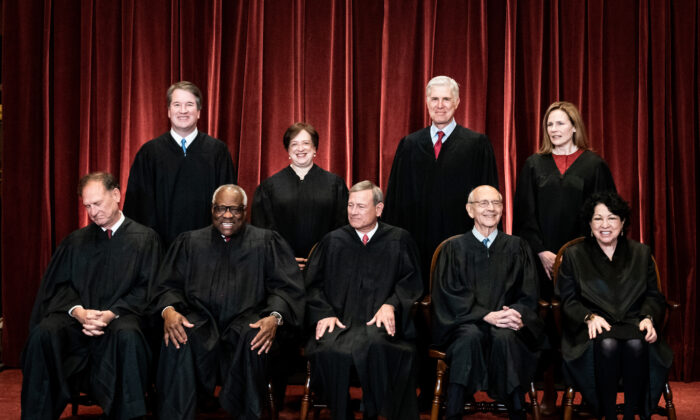 The justices of the Supreme Court were to meet face-to-face on May 12 for a private conference on court business for the first time since the unauthorized publication of a draft majority opinion that would overturn Roe v. Wade generated a firestorm of controversy.

The leaked draft opinion in Dobbs v. Jackson Women’s Health Organization, confirmed as authentic, suggests that a majority of the Supreme Court’s justices are prepared to undo Roe v. Wade, the seminal 1973 precedent that swept away state laws and made abortion legal across the country.

It’s unclear when the final version of the Dobbs opinion will be formally issued by the high court, which heard oral arguments in the case on Dec. 1, 2021.

Protests erupted nationwide, including at the homes of the conservative justices thought to favor overturning Roe, after Politico broke the story and published the Dobbs draft on May 2.

Chief Justice John Roberts ordered the high court’s marshal to investigate the leak, which some say has led to a crisis of confidence in the court that is undermining its legitimacy.

An effort by Democrats to codify the Roe decision in federal law failed on May 11, when the Senate voted 49-51 on a procedural motion, falling 11 votes short of what was needed under Senate rules to move the bill forward.

At the private weekly conference held by the high court, only the justices attend. The justice with the least seniority, in this case, Justice Amy Coney Barrett, is supposed to take notes.

As the deliberative process unfolds, justices take preliminary votes on cases they have heard. Along the way, they sometimes change their votes.

For example, Roberts reportedly was prepared to vote to strike down the Obamacare law in 2012 in NFIB v. Sebelius, but a left-wing pressure campaign supposedly got him to change his position; he voted to uphold the statute.

The whirlwind of publicity about Dobbs doesn’t appear to have changed any of the justices’ votes on the case. Citing anonymous sources, The Washington Post reported on May 7 that a majority of the court still supports overturning Roe v. Wade. No dissenting opinions in Dobbs have been circulated among the justices, according to Politico.

Among the petitions for certiorari, or review, to be considered at the May 12 conference were several prisoner and criminal appeals. If four of the court’s nine justices vote in favor of hearing a petition, it’s scheduled for oral argument.

The Supreme Court’s public information office didn’t reply by press time to requests from The Epoch Times to confirm that the scheduled conference had taken place.