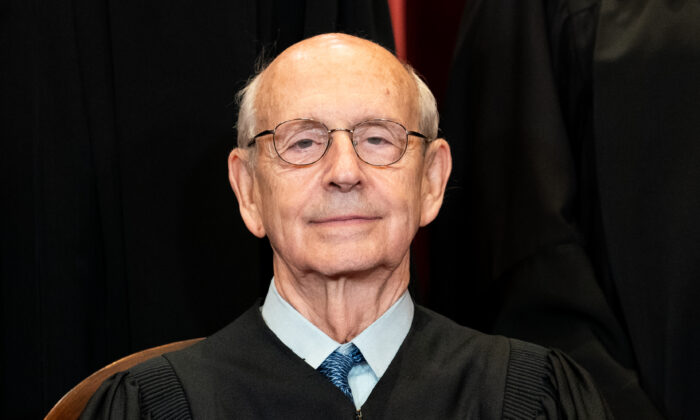 Associate Justice Stephen Breyer sits during a group photograph of the justices at the Supreme Court on April 23, 2021. (Erin Schaff-Pool/Getty Images)
Judiciary

'I decided on balance, I wouldn't retire'
By Isabel van Brugen

Supreme Court Justice Stephen Breyer says he doesn’t intend to retire yet amid a growing push by congressional Democrats and left-leaning groups for him to resign during President Joe Biden’s first term so Biden can nominate his replacement.

During a Sept. 12 interview on “Fox News Sunday,” Breyer, a Clinton appointee, brushed off the calls for him to retire, but said those who are urging him to do so are “entitled to their opinion.”

“They understand the political world much better than I, or they understand it pretty well, and there we are. What else do you want me to say?” Breyer said.

Breyer, 83, has repeatedly said he won’t kowtow to calls from progressive lawmakers to retire due to his age, although he has made clear that he doesn’t intend to hold the position for the rest of his life.

Calls for him to step down due to his age intensified after the justice publicly rebuffed proposals to “pack,” or expand, the Supreme Court in April, suggesting during a speech at Harvard that such a measure would backfire and risk creating an impression that the justice system is politicized.

That month, near the Supreme Court, a truck with the banner “Breyer, retire” was seen driving around the building, according to photos and video footage at the time. In June, members of the pro-socialism “Squad,” including its de facto leader Rep. Alexandria Ocasio-Cortez (D-N.Y.), made similar requests of the justice in Congress.

Separately, Rep. Mondaire Jones (D-N.Y.) told news outlets that he believes that Breyer should step down.

Breyer told host Chris Wallace that there are “many factors” that will play into his decision about when to retire.

“And the role of court and so forth is one of them. And the situation, the institutional considerations are some. And I believe, I can’t say I take anything perfectly into account, but in my own mind, I think about those things,” he said. “I didn’t retire because I decided, on balance, I wouldn’t retire.”

Breyer also told Wallace that he opposes politics surrounding the Supreme Court as it erodes trust, saying that he’s “there for everybody.”

White House press secretary Jen Psaki said in April that Biden won’t interfere in the justice’s decision about when to retire.

“He believes that’s a decision Justice Breyer will make when he decides it’s time to no longer serve on the Supreme Court,” Psaki told reporters at the time.