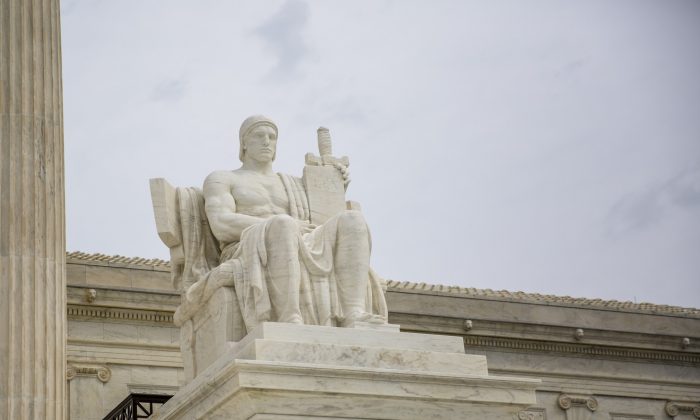 A statue symbolizing the authority of justice outside the Supreme Court building in Washington on Sept. 22, 2017. (Samira Bouaou/The Epoch Times)
US News

WASHINGTON—An unconscious person suspected of drunk driving forfeits his right to refuse consent for a blood draw aimed at gathering evidence against him because it was his own decisions that led to his unconsciousness, a lawyer for Wisconsin told the Supreme Court.

On one hand, the case of accused drunk driver Gerald P. Mitchell’s appeal against a conviction based on a forced blood draw—while he was unconscious—comes as civil libertarians become increasingly vocal in their criticism of what they consider to be government-sanctioned invasions of privacy and unreasonable searches.

On the other hand, government officials and anti-drunk-driving groups laud increasingly aggressive policing, saying it saves lives by keeping drunk drivers off the roads.

On the political right, Rutherford Institute President John W. Whitehead is critical of what he terms “the grim reality of life in the American police state,” in which constitutional rights of “due process, privacy, bodily integrity, the right to not have police seize our property without a warrant, or search and detain us without probable cause—amount to nothing when the government and its agents are allowed to disregard those prohibitions on government overreach at will.”

A few years ago, Herman Schwartz wrote in the left-wing publication, The Nation, that the Fourth Amendment, which “was designed to stand between us and arbitrary governmental authority … has been shattered, leaving our liberty and personal integrity subject to the whim of every cop on the beat, trooper on the highway, and jail official.”

In May 2013, Mitchell was depressed and took around 40 pills with vodka and Mountain Dew before driving. Police found Mitchell walking near his van and administered a breathalyzer test that found his blood alcohol content (BAC) was 0.24 percent, or triple the state’s legal limit for driving. Mitchell was confined and moved to a hospital. Police made hospital personnel draw his blood while he remained unconscious. His BAC at 90 minutes after being arrested was 0.222 percent, so he was charged with operating a vehicle while intoxicated.

Mitchell said the blood-draw evidence was inadmissible because the police violated his Fourth Amendment rights. The state argued under its implied-consent law, Mitchell had effectively consented to the draw by driving on Wisconsin’s roads. The statute states that a “person who is unconscious or otherwise not capable of withdrawing consent is presumed not to have withdrawn consent.” In an appeal, a divided state supreme court upheld the conviction.

During oral arguments on April 23, Hannah Jurss, Wisconsin’s assistant attorney general, told the Supreme Court that Mitchell’s defense goes against what some call the social contract, in which individuals give up some freedom to benefit all who live in society.

In an argument to which Chief Justice John Roberts seemed sympathetic, Jurss said, “The fundamental question is reasonableness.”

“Every state holds drivers to a bargain to comply with testing should police have probable cause of intoxicated driving. Wisconsin, like over half the states in the country, reasonably recognizes that a driver should not evade that bargain by becoming the most dangerous of intoxicated drivers.

“An unconscious driver has made all the choices that put others’ lives at risk but then, through no fault of the government, has put himself in a position where he cannot make further choices. As medical care for him must be a priority, and as that medical care will almost invariably involve a draw of his blood to test for intoxicants, a warrant offers him only slight protection but guarantees law enforcement distraction during … a critical time.”

Roberts said the case may turn on “implied consent and privilege.” Taking time to obtain a warrant may have hindered the police investigation because “alcohol dissipates quickly in the blood.”

“Invading someone’s body is a different level of intrusion,” Sotomayor said. “How reasonable is it to expect that people know [a possible] invasion of their blood is part of that plan?”

Ginsburg mocked the idea of “presumed consent” as “fiction … not consent.”

“How difficult is it to get a warrant in this case,” she asked. “The magistrates weren’t available by phone or email? Often, it only takes 15 minutes.”

Representing Mitchell, Andrew Hinkel criticized the state’s reliance on what he called an unconstitutional theory to draw his client’s blood.

“Consent is a question of fact,” Hinkel said. “They believe: get a warrant if you can. And if you can’t, you don’t have to.”

Hinkel said when hospital personnel draw blood “for medical reasons,” it is legally different than when blood is drawn at the insistence of the police.

“The difference is that when the hospital is performing a blood draw on a person, it’s for their benefit … we have actually a related but distinct concept called implied consent in the medical setting, because we imagine that everyone who was in this circumstance would want medical treatment, and so, if they were capable of agreeing to it, they would. We don’t have that same presumption when it comes to blood draws.”