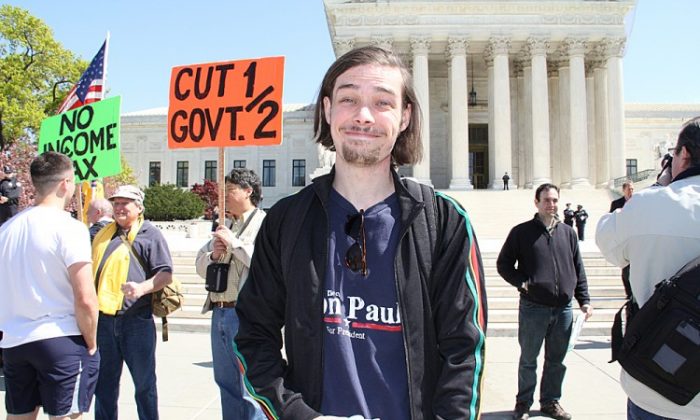 Outside the courtroom, opponents of the ACA protested at a rally on Tuesday. (Shar Adams/The Epoch Times)
US

WASHINGTON—On its second day of arguments over whether the Affordable Care Act (ACA) is constitutional or not, on Tuesday the U.S. Supreme Court debated for two hours whether Congress can require virtually everyone to have health insurance or pay a penalty: the individual mandate.

Solicitor General Donald B. Verrilli started the proceedings by making the case for the federal government in support of the mandate. His argument centered on the power given to Congress by the Constitution’s commerce clause (Article 1, Section 8, Clause 3), which states that Congress has the power “To regulate commerce with foreign nations, and among the several states, and with the Indian Tribes.”

“Under the commerce clause, what Congress has done is to enact reforms of the insurance market, directed at the individual insurance market,” Verrilli stated, enumerating reforms “that preclude discrimination based on pre-existing conditions” and “require guaranteed issue and community rating.”

He said the individual mandate, or “minimum coverage provision,” is “necessary to carry into execution those insurance reforms.”

Verrilli said that for 80 percent of Americans, the insurance system works well—”But for more than 40 million Americans who do not have access to health insurance, either through their employer or through government programs such as Medicare or Medicaid, the system does not work.

“Those individuals must resort to the individual market, and that market does not provide affordable health insurance,” he stated. Verrilli said that Congress saw a need to design a health system and reform and regulate the market

To pay for the above, the ACA requires virtually everyone be in the insurance pool.

Justice Anthony Kennedy seemed skeptical, and interrupted with: “Can you create commerce in order to regulate it?”

“What is being regulated is the method of financing health, the purchase of health care. That, itself, is economic activity with substantial effects on interstate commerce,” replied the solicitor general.

Verrilli explained that “virtually everybody else is either in that market or will be in that market,” because everyone at some time in their life is going to need medical care: 83 percent visit a physician every year, with 96 percent over a 5-year period.

Verrilli argued that in regulating the insurance market, Congress had to impose the mandate because of the billions of dollars spent on the “uncompensated costs” of people who use emergency rooms.

To balance such costs, private insurance providers “charge higher rates in order to cover the cost of uncompensated care, and insurance companies reflect those higher rates in higher premiums, which Congress found translates to a thousand dollars per family in additional health insurance costs,” he said.

Justice Ginsburg agreed, noting that “Maryland Hospital Care bills 7 percent more because of these uncompensated costs, that families pay a thousand dollars more than they would” if there were no costs.

Justice Samuel Alito had a different perspective. “The mandate is forcing [young, healthy] people to provide a huge subsidy to the insurance companies for other purposes that the act wishes to serve,” he said.

Chief Justice Roberts supported Alito’s concerns. “But your theory is that there is a market in which everyone participates because everybody might need a certain range of health care services, and yet you’re requiring people who are … never going to need pediatric or maternity
services to participate in that market,” he stated.

“When you are changing the relation of the individual to the government in this, what we can stipulate is, I think, a unique way, do you not have a heavy burden of justification to show authorization under the Constitution?” said Justice Kennedy.

Kennedy’s words, “Changing the relationship of the individual to the government” indicate that he may be seeing the mandate in a fundamentally different way than other legislation. He later asked Verrilli to identify the limits of the commerce clause.

“If Justice Anthony M. Kennedy can locate a limiting principle in the federal government’s defense of the new individual health insurance mandate, or can think of one on his own, the mandate may well survive,” said long-time observer of the high court and SCOTUSblog commentator, Lyle Denniston.

“If he does, he may take Chief Justice John G. Roberts Jr. and a majority along with him. But if he does not, the mandate is gone,” he concluded.

A just-released New York Times/CBS news poll claims that 47 percent of those surveyed oppose the health care law, while 36 percent support it. But the number rises over the individual mandate component, with two-thirds of those polled wanting the Court to overturn it.

Outside the courtroom, opponents of the ACA protested at a rally on Tuesday.

“Most of the people here protesting, they just don’t understand that the more the government intrudes, the higher the cost goes,” said Josh Schaefer, 23, a self-employed gardener from Southwest Penn.

Ashleigh Weaver from Texas said that the law “was passed unconstitutionally and it is an infringement on our rights as an American and the government shouldn’t be able to mandate me to have healthcare.”

Angel Martinis, who works for the federal government, believes the lack of support for the law is due to a lack of understanding. “I don’t think the Democrats have [explained it well] … I don’t think President Obama or the Democrats did explain it as well as they could,” he said. “Generally most of the people they seem to have misinformation about what is actually in the bill and are quite irate about things that aren’t going to happen.”

with reporting from Shar Adams