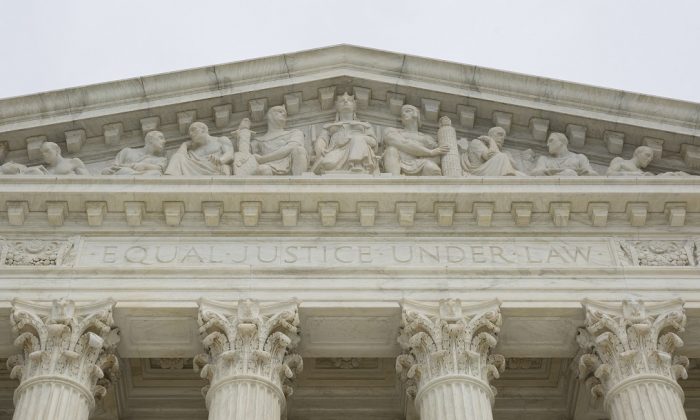 WASHINGTON—The Supreme Court appeared divided on March 26 about separate legal challenges to the state electoral maps of North Carolina and Maryland, which partisans on both sides in those states say are unfairly tilted to their opponents.

Whatever the court decides to do—it could sidestep the controversies altogether by ruling the challenging parties lack legal standing to bring their cases—is likely to have an impact on the 2020 elections, including President Donald Trump’s reelection effort, and beyond.

The Supreme Court has reportedly never struck down an entire state map for gerrymandering—the partisan manipulation of the boundaries of electoral districts to favor one party or group—but it has ordered the redrawing of congressional districts.

Traditionally, conservative members of the court tend to favor treating redistricting as a political question that should be left to lawmakers who have been elected to make this kind of decision. Liberal justices tend to be more open to intervening in the map-drawing process to correct perceived injustices.

In the cases before the court, in the presidential battleground state of North Carolina, the legislature redrew the map in 2016, giving Republicans a 10 to 3 advantage over Democrats in the delegation to the U.S. House of Representatives. The legislature had to act because, at the urging of left-wing activist groups, a U.S. district court found the 2011 map amounted to an unconstitutional race-based gerrymander. A legislative committee made the new map based on seven criteria, including politics and race.

In the Maryland case, the map was also redesigned, providing Democrats a 7 to 1 advantage over Republicans in the liberal bastion’s congressional delegation. Although Republicans have not fared well in Maryland congressional elections for many years, they cried foul and sued.

In the North Carolina case, Rucho v. Common Cause, attorney Paul D. Clement argued that the current redistricting system is not broken and that the court should not wade into this political controversy.

“This court has repeatedly failed to identify a justiciable standard for partisan gerrymandering claims. The cause of that failure is not a lack of judicial imagination or a lack of claims that the particular map before the court was the most extreme ever,” Clement said.

“Rather, the root cause of this failure is the basic decision of the Framers to give responsibility for congressional districting to political actors. The Framers consciously chose to … give the primary authority to state legislatures. And then, to police the possibility that state legislatures, which the Framers knew to be partisan institutions, would engage in too much partisanship, the Framers chose a structural solution, by giving the federal Congress supervisory authority.”

“That ship has sailed,” Sotomayor said. “Once we decided the one person, one vote concept, we’ve been pretty much in all of our jurisprudence saying that certain acts by the legislature are unconstitutional, including race discrimination and others.”

Ginsburg asked Clement, “Does one person have one vote that counts equally with others if the impact of her vote is reduced based on her party affiliation?”

“You still have an equal right to vote as an individual,” Clement said, but the parties on the other side aren’t complaining about “a purely individual injury.” They are complaining their votes have been “diluted in some way” because they have been grouped in a district with either “too many people who agree with them or too few people who agree with them,” which is not “a justiciable injury.”

He noted that politicians in the early days of the nation understood partisan gerrymandering but did not ask judges to stop it.

“James Madison was the intended target of a partisan gerrymander by Patrick Henry. He complained about it bitterly. So did George Washington. Neither of them contemplated suit,” he said. “[Alexander] Hamilton actually suggested to John Jay that the Federalists ought to partisanly gerrymander the electoral college for the 1800 presidential election. John Jay said it wasn’t such a good idea. All three authors of the Federalist Papers knew about this and didn’t think there was a judicial solution.”

Allison J. Riggs, lawyer for the League of Women Voters of North Carolina, said the court was taking a big “reputational risk” if it opted to do nothing.

The Supreme Court, she argued, should involve itself in drawing district boundaries because the case “represents the most extreme example of a non-responsive legislature that believes that this court will implicitly endorse unfettered partisan manipulation in redistricting by declining to rein in this most egregious example.”

Riggs said the leadership of the General Assembly in Raleigh “essentially bragged” that the 10-to-3 plan was “punishing voters who supported Democratic candidates” by creating districts that would deprive voters of “any meaningful ability to use normal democratic processes to redress infringements on their individual constitutional rights.”

Justice Neil Gorsuch said that if partisan gerrymandering was such a serious problem, voters ought to deal with it on their own, as they did in several states that in 2018 approved referendums on redistricting rules.

Justice Elena Kagan responded to Gorsuch, saying most states don’t permit voters to take these matters into their own hands. “People really can’t fix it,” she said, which is what made it “dramatically wrong here.”

This prompted Chief Justice John Roberts to interject with a quip: “Well, your best authority is a newspaper editorial?”

Roberts also said if there were “a partisan-free,” “neutrally drawn” map, “that would be the first time in history.”

Maryland Solicitor General Steven M. Sullivan said his state’s redistricting efforts were driven by demographic, geographic, and other concerns, not by partisan politics.

“I don’t think you should run away from the obvious” fact that the goal of redrawing district boundaries was to ensure Democrats retained seven of the state’s eight seats in the U.S. House, Kavanaugh said.

“Well, I don’t think it’s running away to say that there were a lot of other factors … that had to do with this,” Sullivan replied.

The justices previously refused to accept the Maryland lawsuit, finding June 18, 2018, that the Supreme Court lacked jurisdiction at that time to hear the case.

Before that, a unanimous three-judge panel of the U.S. District Court for the District of Maryland held that Democrats had unconstitutionally gone after GOP voters in the state’s 6th Congressional District.

“The massive and unnecessary reshuffling of the Sixth District, involving one-half of its population and dictated by party affiliation and voting history, had no other cause than the intended actions of the controlling Democratic officials to burden Republican voters,” wrote Judge Paul Niemeyer.

Judge James Bredar concurred in a separate opinion, describing partisan gerrymandering as “a cancer on our democracy.”