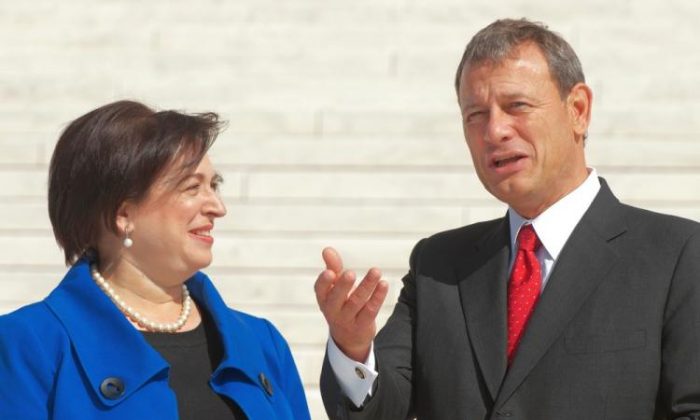 The Supreme Court decided to not intervene–for the time being—in the case of a San Diego high school student with natural immunity who claims that the local school district’s COVID-19 vaccination mandate imposed on students aged 16 and older unconstitutionally discriminates against her by not offering a religious exemption.

The San Diego Unified School District (SDUSD) is one of the few in the United States that requires students to receive the vaccine for in-person instruction while not offering a religious exemption for schoolchildren. Separately, the school district fired in January more than 70 employees who failed to get vaccinated.

The case took a long and winding path to the Supreme Court, after being ruled on repeatedly by state and federal courts. For example, on Dec. 4, 2021, the U.S. Court of Appeals for the 9th Circuit refused to block enforcement of the mandate.

The emergency application for injunctive relief in Doe v. San Diego Unified School District, court file 21A217, was presented to Justice Elena Kagan, who referred it to the full Supreme Court. The case was initiated originally in U.S. District Court for the Southern District of California.

On Feb. 18, almost two months after the application was filed, the full court denied (pdf) it “without prejudice to applicants seeking a new injunction if circumstances warrant.”

The application was “denied in light of changed circumstances,” according to the order issued by the court regarding the case.

“Because respondents have delayed implementation of the challenged policy, and because they have not settled on the form any policy will now take, emergency relief is not warranted at this time,” the order reads.

The applicant, identified by the pseudonym Jill Doe, is “a healthy sixteen-year-old junior who has already recovered from COVID-19,” the application (pdf) states.

Jill plays multiple sports and hopes to earn a college sports scholarship by excelling at those sports during the upcoming semester, according to court documents.

“In addition to being an avid athlete, Jill is devoted to her Christian beliefs,” the documents read. “While Doe has developed natural immunity to COVID-19 from a prior infection, her religious beliefs forbid her from receiving any of the COVID-19 vaccines.”

Attorneys from the Thomas More Society, a national public interest law firm focusing on religious freedoms, filed the emergency application with the Supreme Court on Dec. 10, 2021, asking it to block the mandate.

According to Paul Jonna, a partner at LiMandri and Jonna and special counsel for the Thomas More Society, when the application was filed, his client was weeks away from being denied admission to school and excluded from participating in sports unless she provided evidence that she had complied with the school district’s vaccination mandate.

On Dec. 20, 2021, a state court judge struck down SDUSD’s mandate, holding that it was impermissible because such a mandate could only be issued by the state. That ruling was later put on hold by the California Court of Appeal.

Although the district could have attempted to reinstate its vaccine mandate as of Feb. 1, the SDUSD board voted on Feb. 8 to not implement the vaccine mandate for in-person instruction until the fall 2022 semester, at the earliest, Jonna said.

“Here we go again,” wrote Judge Patrick Bumatay, who was appointed by then-President Donald Trump. “When it comes to dealing with the COVID-19 crisis, the Supreme Court’s instructions have been clear, repeated, and insistent: no COVID-19 restriction can disfavor religious practice.

“The Supreme Court has again and again admonished this court for failing to follow its guidance. Indeed, almost a year ago, the Court expressed frustration that, for the ‘fifth time,’ it had to “summarily reject … the Ninth Circuit’s analysis of California’s COVID restrictions on religious exercise.

“With this case, our court is gunning for a sixth.”

Jonna told The Epoch Times in an interview that he doesn’t view the Supreme Court’s decision to duck the case for now as a defeat.

The school district “pulled their mandate for now,” according to Jonna.

“Our client’s goal was to go to school and play sports without having to comply with an illegal mandate,” he said. “As it stands right now, she can do that. So that’s number one. Number two: It’s very clear that a lot of judges at the 9th Circuit and, we think, the majority of justices of the Supreme Court, are interested in this case.

“Based on the text of that order, it seems they’re inviting us to seek further review by the Supreme Court if this mandate is reconstituted for the fall semester.”

The Epoch Times reached out repeatedly to the San Diego Unified School District for comment, but hadn’t received a reply as of press time.