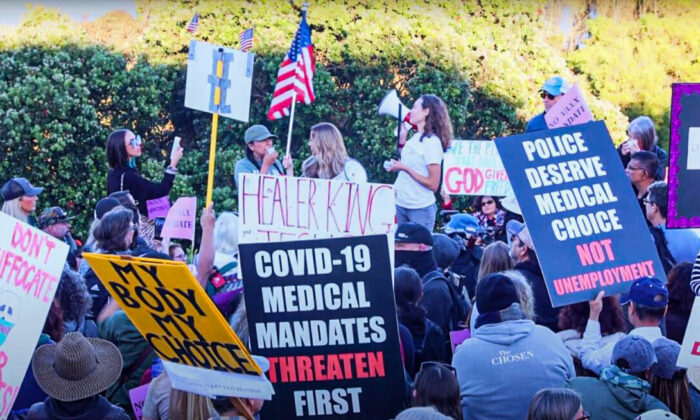 The San Diego Unified School District (SDUSD) in California has fired over 70 employees who remain non-compliant with its COVID-19 vaccination mandate, according to reports.

The school district set Jan. 24 as the the deadline for all SDUSD staff to either submit proof of full COVID-19 vaccination or get an approved exemption. Letters of termination have been sent out to those who refused to comply with the requirements, reported San Diego Union Tribune.

“I was getting phone calls last week, with some of my colleagues and peers [saying] that they had just received a termination letter,” Dr. Amanda Morris, a mental health clinician for the SDUSD, told CBS San Diego.

“Our leadership, unfortunately, is making some pretty horrendous comments stating our department and district would be better off if the unvaccinated would just quit,” said Morris, who has worked at the school district for 15 years.

Under the plan released in September 2021, the SDUSD mandated that all employees and students aged 16 years and older to get two doses of the vaccine by Dec. 20, saying that employees who fail to comply would be terminated, and that students who don’t comply would have to attend online classes from home.

The vaccine mandate for SDUSD students had resulted in a lawsuit, resulting in a San Diego judge in December finding the mandate unlawful, noting that only the California Legislature has the authority to make certain vaccines a condition for in-person school attendance. The judge also took issue with the lack of exemption based on personal beliefs.

The ruling, however, didn’t affect the vaccine mandate for the district’s 15,000 employees.

According to San Diego Unified School Board Trustee Richard Barrera, more than 840 employees were granted medical or personal belief exemption. He also said the high percentage of compliant among employees means the vaccine mandate has succeeded.

“It proves that vaccine mandates work and are necessary,” Barrera said, reported the Tribune. “We will be at 100 percent of our staff that is either fully vaccinated or has received an approved accommodation, and with very little loss of staff. What it shows is that staff who had been reluctant to get the vaccine are getting it as a result of the mandate.”

“At this point, we believe that we can fully cover for any staffing shortages that might result from the termination of those employees,” he added.