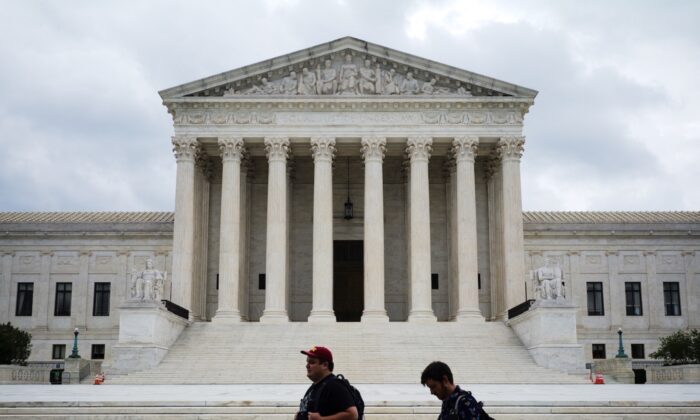 The U.S. Supreme Court is seen in Washington, D.C. on Sept. 1, 2021. (Mandel Ngan/AFP via Getty Images)
By Katabella Roberts

The Supreme Court on Wednesday denied a bid to stop Texas from banning abortions after a fetal heartbeat is detected, allowing one of the most restrictive abortion bans in the U.S. to remain in effect.

Senate Bill 8, known as the Texas Heartbeat Act, was signed into law by Republican Gov. Greg Abbott in May.

The law enables private citizens—except for an individual who impregnated a woman through rape or incest—to sue physicians who perform abortions after a fetal heartbeat is detected.

It also allows for civil action to be brought against any person who allegedly aided or abetted a violation of the law. Individuals found to have violated the law would have to pay $10,000 to the person who successfully brings such a lawsuit.

The law does not provide an abortion exception for a pregnancy that’s a result of incest or rape but allows women to have an abortion for “medical emergencies.”

On Wednesday, the court ruled 5-4 against providing relief to abortion and women’s health providers who filed an injunction barring enforcement of the ban on Monday, while litigation continues in their lawsuit challenging its constitutionality.

The court declined to block enforcement of the law over the objection of three liberal associate justices and Chief Justice John Roberts.

“The applicants now before us have raised serious questions regarding the constitutionality of the Texas law at issue,” the court’s majority wrote in a short opinion. “But their application also presents complex and novel antecedent procedural questions on which they have not carried their burden.”

The decision saw one of the court’s six conservatives, Chief Justice John Roberts, join the three liberals in dissent.

“Presented with an application to enjoin a flagrantly unconstitutional law engineered to prohibit women from exercising their constitutional rights and evade judicial scrutiny, a majority of justices have opted to bury their heads in the sand,” she added.

The court’s majority, in an unsigned explanation, said the decision “is not based on any conclusion about the constitutionality of Texas’s law” and allows legal challenges to move forward.

The Texas Heartbeat Act has drawn praise from pro-life advocates and opposition from abortion providers, 20 of whom sued last month to stop it from going into effect.

Opposition groups, which include Planned Parenthood, said the law could lead to abortion providers, clinic staff, and others being “saddled with endless lawsuits that consume their time and resources and prevent them from providing health care services, ultimately forcing them to shut down.”

The ACLU argues that it would effectively outlaw at least 85 to 90 percent of the abortions sought in the state, as many people don’t know they are pregnant within the first six weeks.

It also “creates a bounty hunting scheme that encourages the general public to bring costly and harassing lawsuits against anyone who they believe has violated the ban,” including “a person who drives their friend to obtain an abortion, abortion funds providing financial assistance to patients, health center staff, and even a member of the clergy who assists an abortion patient,” ACLU said in a statement.

Christian D. Menefee, the attorney for Harris County, the largest county in Texas, said the new law is “dangerous attack on women’s reproductive health” and “a dangerous and blatant attempt to undermine Roe v. Wade.”

“It bans abortions before most women even know they’re pregnant, effectively ending all abortions in Texas,” Menefee said in a statement to The Epoch Times, adding, “The Texas Legislature drafted the law to let any person enforce it because it believed it could evade review by the Supreme Court.”

“No woman should have to drive to another state for an abortion. And no one should be dragged into expensive and burdensome lawsuits because of a medical decision the United States Supreme Court has time and time again said is legal,” he added.

Meanwhile, pro-life organizations such as Texas Alliance for Life welcomed the Texas Heartbeat Act and the Supreme Court’s decision.

“We celebrate the lives of unborn children who will be protected from abortion as a result,” said Dr. Joe Pojman, executive director of Texas Alliance for Life in a statement.

“Hundreds of pregnancy centers and maternity homes throughout Texas are expanding their capacity and resources to meet the needs of women facing unplanned pregnancies who may seek their support,” he said.

“Also, the State of Texas has increased funding for the highly successful Alternatives to Abortion program to $100 million for the biennium to provide services to 150,000 clients per year.”

Another pro-life group, Texas Right to Life, said in a tweet that the Supreme Court’s decision was “a huge victory for the pro-life movement,” one they hoped would be replicated “across the nation.”

The measure went into effect early on Wednesday morning after the  Supreme Court and a federal appeals court did not act by the 1a.m. ET deadline for the law to take effect.

Signing the measure into law in May, Texas Gov. Greg Abbott said “Our creator endowed us with the right to life and yet millions of children lose their right to life every year because of abortion.”