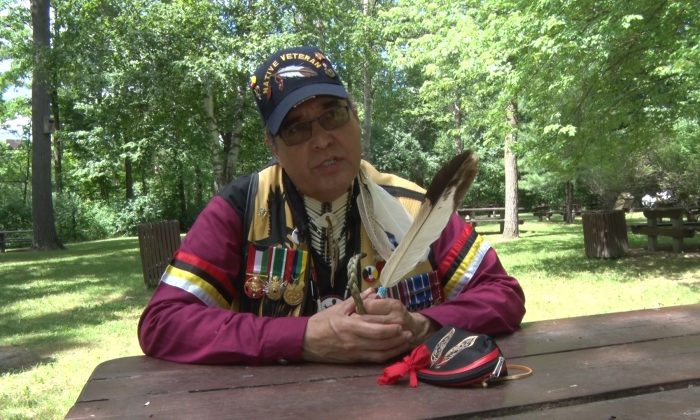 Earl Robert Crane speaks on the relationship between Canada and its original peoples during the Aboriginal Festival and Competition Powwow in Ottawa in June 2014. Crane believes Aboriginal Peoples are nearing a time when they can assert their legal rights in a more significant way. (Matthew Little/Epoch Times)
Canada

OTTAWA—Last week’s Supreme Court decision changed the rules of engagement between Canada’s aboriginal people and the federal and provincial governments, says the president of the Union of B.C. Indian Chiefs.

It’s a change that has experts questioning the viability of major resource projects like the proposed Northern Gateway pipeline from Bruderheim, Alberta, to Kitimat, British Columbia.

“A dark cloud of economic uncertainty hangs over B.C. with respect to resource development,” says Grand Chief Stewart Phillip. It’s a view being echoed by commentators like Jeffrey Simpson, the Globe and Mail’s national affairs columnist.

On June 26, the Supreme Court of Canada affirmed the Tsilhqot’in Nation’s claim on roughly 700 square miles of land—and, by extension, expanded the basis of all aboriginal land claims in Canada.

It is the latest in a string of legal wins affirming aboriginal legal rights regarding land. And it could fundamentally change the balance of power between Aboriginal Peoples and the provincial and federal governments over land use.

Previous court rulings required the federal and provincial governments to consult with aboriginals whenever decisions like approving a mine or pipeline affect aboriginal rights or land title. But this ruling goes much further.

“Government and industry can’t merely serve notice that a particular corporation has interest in doing a particular project, and then they’ve fulfilled their duty of consultation and away they go,” he says.

“Consent has been catapulted to the forefront as being a major issue, whereas 24 hours ago, government and industry merely flirted with some kind of consultation. Those days are gone.”

Phillip says the shift moves the government’s duty from vague consultations with aboriginal governments toward getting actual consent, a change with wide-reaching implications.

However powerful the ruling may be, its impact could be limited by the cost of launching legal challenges that would reference it.

“I think we’re becoming better at working with the law in order to get these sorts of judgements,” says Earl Robert Crane of Alberta’s Siksika Nation.

Crane, who co-chaired the Department of National Defence’s Aboriginal Advisory Group and is now senior manager of business development at ATCO Structures & Logistics, said that awareness doesn’t change the reality of hundreds of First Nations, Metis, and Inuit governments across the country.

They still require mature leadership and funds to capitalize on their legal rights, he said.

“Are all of these communities ready to take up the challenge when necessary? I don’t think so.”

But despite that challenge, and the fact that many aboriginal communities are only now beginning to assert their legal rights, a change is coming, Crane said

“I think it’s like when you boil a pot of water. I think we are at that point just before the water actually starts to boil.”

Crane believes that within his lifetime he will see a major shift in the relationship between the Crown and Aboriginal Peoples.

In the ruling handed down by the court, Chief Justice Beverley McLachlin took note of the different views aboriginals have about land ownership.

“The court must be careful not to lose or distort the aboriginal perspective by forcing ancestral practices into the square boxes of common law concepts, thus frustrating the goal of faithfully translating pre-sovereignty Aboriginal interests into equivalent modern legal rights,” she wrote.

In other words, McLachlin advocates looking at issues like land rights from an aboriginal perspective.

It’s a view near opposite that which sparked the first wave of treaties when the Crown was able to use a vastly different understanding of land ownership to its own advantage when negotiating treaties.

Many Aboriginal Peoples at that time had a fundamentally different understanding of the meaning of the treaties—an understanding the court has begun to affirm in its latest ruling.

That change has major implications including recognizing the idea of territory central to many nomadic First Nations like the Tsilhqot’in.

The Tsilhqot’in won their first case in provincial court, but lost on appeal when the province argued that the band could lay claim only to specific sites they intensively used rather than the expanse of territory they hunted, fished, and guarded against outsiders for hundreds of years.

The Tsilhqot’in argued that a nation is more than the place where people live—it is the areas in between—and that they had occupied that territory and controlled it when others wanted to traverse or occupy it.

The Supreme Court agreed, granting the Tsilhqot’in Nation its original claim. And in doing so, the court laid out much higher requirements for provincial and federal governments that want to allow resource projects to move ahead on disputed aboriginal territories.

The decision comes at a time of tense relations between the federal government and aboriginal communities, which include First Nations, Inuit, and Métis peoples.

But in its efforts to accelerate the export of those resources, which include massive reserves that remain land-locked in Alberta’s oilsands, the government has found itself at odds with increasingly powerful aboriginal groups.

Now the Supreme Court has redefined the relationship, giving Phillip hope of genuine relations between Canada and its original peoples, at least in B.C.

“They have talked the talk and now they will have to walk the walk. The law has changed,” he said.

Walking the walk means true consultation before resource projects go ahead. It also means that governments and industry must reconsider the legal strength of aboriginal land claims.

Should that happen, Phillip believes a change could unfold and an increasingly confrontational relationship could be repaired.

Because B.C. does not have treaties—except for the few negotiated in modern times—much of its land is considered unceded territories, leaving some question about the implications of the ruling in other provinces. Despite those questions, the ruling shows the court gives significant weight to aboriginal views on land rights. That will weigh significantly on legal decisions elsewhere in the country.