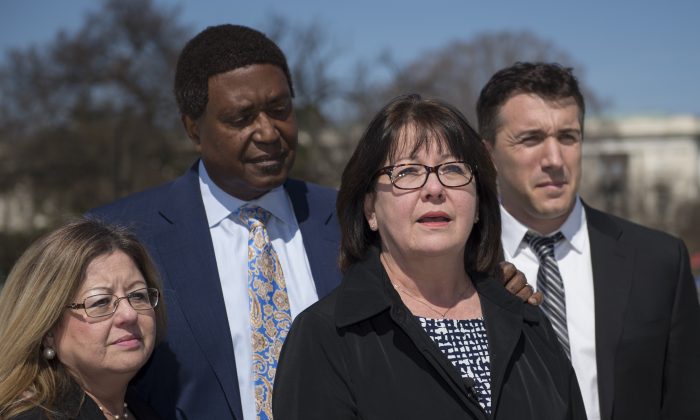 Frances Sheehan, sister of Teresa Sheehan, speaks to reporters outside the Supreme Court in Washington, D.C., Monday, March 23, 2015, with (L to R) her sister Joanne Sheehan, and attorneys John Burris and Ben Nisenbaum, after the Supreme Court heard arguments in the San Francisco v. Sheehan case. (AP Photo/Molly Riley)
US

The U.S. Supreme Court heard oral arguments Monday in a case that will determine whether the Americans with Disabilities Act (ADA) requires police officers to accommodate people with mental illness when arresting them.

The case began in San Francisco in 2008, when Teresa Sheehan, who was diagnosed with schizoaffective disorder, threatened to kill a social worker employed in the group home she lived in. The social worker called in police, who shot Sheehan five times after she came at the officers with a knife, according to court documents.

Sheehan survived the incident and later filed suit against the city, charging that the police should have taken into account her mental illness and diffuse the situation without injuring her.

A federal district court threw out the case, but the Ninth Circuit Court of Appeals ruled that the ADA did in fact apply to police arrests, and that “the officers failed to reasonably accommodate Sheehan’s disability” when they did not attempt to resolve the confrontation peacefully.

The city then brought the case to the Supreme Court, hoping to reverse the decision. In its petition to the Court, the city said the case was important to review because nationally, 2.7 percent to 5.9 percent of the suspects police encounter have a serious mental illness. Officers need guidance on how to do their jobs without being liable to lawsuits, it explained.

On Monday, most of the justices expressed skepticism that police should be restricted when encountering violent suspects.

But a number of recent police shootings involving unarmed suspects suffering from mental illness has brought criticism that the police are too heavy-handed in their tactics, such as in Atlanta, Ga., where 27 year-old Anthony Hill was shot and killed after walking around naked and ignoring officers’ commands to stop when he ran toward them.

Some police departments in the country have “crisis intervention teams” (CIT) who are trained to recognize people in psychiatric distress, negotiate with them, and then transfer them safely to a facility where they can get treatment. The model was first devised in Memphis, Tenn., in 1988, and is now being used in at least 35 states.

Police may start shouting commands or say to the mental health recipient ‘do you want to do this the easy way or the hard way?
— Carla Rabinowitz

Police officers are often trained to command and control a situation they’re responding to, which can exacerbate a mentally ill person’s condition, said Carla Rabinowitz, project coordinator for the Communities for Crisis Intervention Teams in NYC, a group that is working to bring those teams to New York City’s police department.

Training for the officers is typically a 40-hour course that teaches them to identify mental health symptoms and show understanding for the person in crisis. Officers also participate in simulations that re-create what it’s like for a person to be hearing voices or experiencing hallucinations.

Police go through different mental health disorders and their common signs: people with manic depression tend to talk nonstop, while people who are schizophrenic tend to experience hearing voices.

Places that have implemented CIT’s have been able to prevent violent or fatal results for both the civilian and the officer. San Antonio, Texas, for example, which has trained 92 percent of its police force in CIT, has not had one use-of-force incident since 2008, according to Rabinowitz.