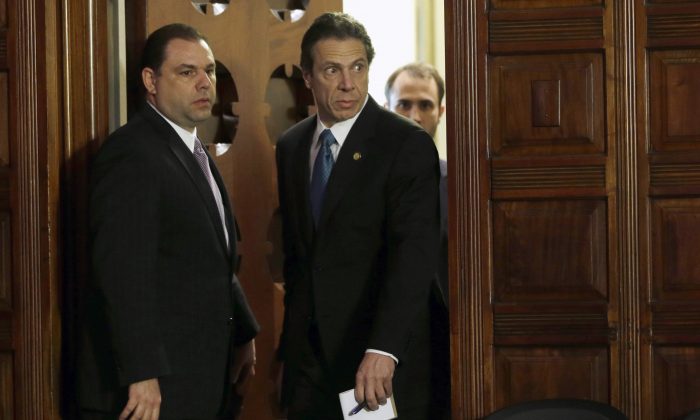 The Supreme Court agreed to review the corruption convictions of Joe Percoco, a longtime aide to former New York Gov. Andrew Cuomo, in a case that may call into question the legality of honest-services fraud prosecutions.

Over the opposition of the Biden administration, the high court decided on June 30 to hear Percoco v. United States, court file 21-1158. As is their custom, the justices didn’t provide reasons for their decision to accept the case.

Percoco was convicted in 2018 on two counts of conspiracy to commit honest-services fraud for taking in upward of $300,000 from companies that hoped to gain influence with the Cuomo administration. He was sentenced to six years in prison, but was released two years early in 2021.

He had been executive deputy secretary in the governor’s office, but at the time of the payments that the government characterized as bribes, he had temporarily stepped down from the position to run Cuomo’s reelection campaign.

The Biden administration stated in a brief (pdf) that despite formally leaving state employment, Percoco “held onto and used his [governor’s office] telephone, desk, and office, where he continued to conduct state business.” Percoco made it clear that he “had a guaranteed position with Cuomo’s administration after the election.”

Percoco claims innocence, arguing that because he wasn’t a government official at the time he accepted the funds, no corruption was involved.

He attacked the idea of honest-services fraud in the petition (pdf) he filed with the high court on Feb. 17.

Public officials have what lawyers call a fiduciary obligation “to act in the best interests of the public, while private citizens do not,” the petition states.

Federal law makes it a crime to engage in honest-services fraud, which it defines as “a scheme or artifice to deprive another of the intangible right of honest services.” Although the law was created to combat government corruption, its application isn’t limited to just government officials, and it can cover private citizens as well. The phrase “honest services” isn’t defined, which has allowed the courts to decide on the law’s reach.

For honest-services fraud to take place, someone must pay a bribe and someone must be harmed by it. The thinking behind the law is that the person accepting the bribe owes a duty to someone else, such as the citizenry.

Percoco argues that his is a case in which “federal integrity prosecutors [were] running amok and getting away with it.” In the case, the federal appeals court “held that private citizens can owe a fiduciary duty to the public and therefore be guilty of honest-services fraud.”

The appeals court found that “if a jury concludes that a private person exercises enough de facto influence over government decisionmaking or that state officials sufficiently rely on him, the jury can send him to prison for bribery even if he had no official title, no official power, and no official duties.”

This “expansion of federal bribery law is both wrong and dangerous,” Percoco wrote in his petition, noting that the Supreme Court “should stop this pernicious theory in its tracks.”

The high court is expected to hear oral arguments in the case in its new term, which begins in October.