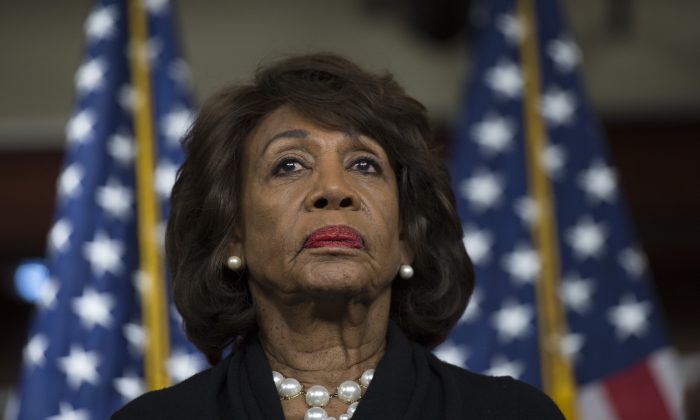 Supporters of Maxine Waters Burn American Flag Outside Her Office

A few dozen supporters of Democratic Rep. Maxine Waters gathered outside her office on July 19, and burned an American flag while chanting “Black Power.”

The small group appeared at the scene to counter a planned protest from a right-wing group called the Oath Keepers. In a call to action posted days earlier on July 17, the Keepers group described the congresswoman as a “protest terrorist inciter” on Twitter.

On the day of the demonstration, the Oath Keepers backed out, according to media reports. But supporters of Waters, including union workers, church leaders, and members of activist groups still rallied together. Some demonstrators held up signs that said: “Resist!”

Waters had previously called for supporters of the Democratic Party to harass Trump administration officials in public. She asked supporters to “create a crowd” and to “push back” on them, in a rally in Los Angeles on June 23.

As the group was yelling out slogans, a pick-up truck reportedly approached nearby. Two men inside the truck, who appeared to be white, were stopped by the crowd before some of the protesters opened the doors and grabbed a flag flying on a pole, according to Newser. The truck then sped off.

Footage of the July 19 demonstration showed some of Waters’ supporters lighting the American flag on fire. The flag was also stomped on and kicked around, as people surrounding it cheered in unison.

There was no protest outside Maxine Waters office today. A group called #oathkeepers did not show up. Some counter protestors who came to support Waters burned an American flag in the street. #maxinewaters #flagburning #flag pic.twitter.com/pafH7nJrWL

In a statement one day before the planned demonstration, Waters changed her tone from earlier comments, instead pleading for her supporters to not be lured into a confrontation.

“Such an occurrence would only exacerbate tensions and increase the potential for conflict,” Waters said, adding that it would “create an explosive conflict in our community.”

Waters’ previous comments that appeared to call for violence angered many and even caught the ire of President Donald Trump, who criticized her on Twitter.

“Congresswoman Maxine Waters, an extraordinarily low IQ person, has become, together with Nancy Pelosi, the Face of the Democrat Party,” Trump wrote on June 25. “She has just called for harm to supporters, of which there are many, of the Make America Great Again movement.”

A resolution to censure and condemn Waters for her comments was introduced by Rep. Andy Biggs (R-Ariz.) on June 25. H.Res. 962 also called for Waters to issue a formal apology to members of the Trump administration and to “immediately resign from office.”