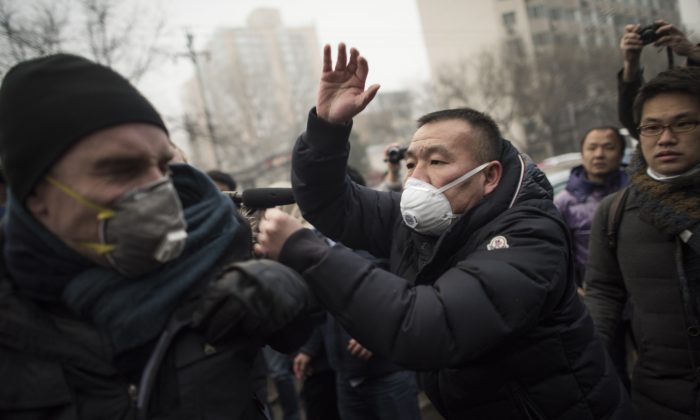 Supporters of Chinese Lawyer Roughed Up as Trial Begins

As the long-awaited trial of Pu Zhiqiang, a prominent Chinese human rights lawyer, commenced in a Beijing court on Monday, Dec. 14, Beijing police roughed up Pu’s supporters and journalists gathered outside the courthouse.

“The fact that so many citizens, foreign media, and even diplomats went to the court has made the authorities extremely furious,” said Teng Biao, one of China’s most notable human rights lawyers and now a visiting scholar at Harvard Kennedy School, in a telephone interview. “They flew into a rage out of humiliation.”

Pu, 50, has been in custody since May 2014. Ostensibly, he is being charged with “inciting ethnic hatred” and “picking quarrels and provoking trouble”  for seven posts on a Chinese microblogging site.

But the real reason for the prosecution is political, says Teng Biao. “Pu Zhiqiang has been at the forefront of the human rights movement in China,” he said. His specialities include agitating for the disclosure of the truth of the 1989 Tiananmen Square massacre, agitating for the closure of the labor camp system (which was effected), and criticizing former security czar Zhou Yongkang for running a highly repressive security apparatus.

“The Chinese authorities are sending a message to the world that they won’t give in to pressure from international society in handling this human rights case,” Teng said.

The trial of Pu and the brazen police action against protesters and journalists covering the event is the Chinese Communist Party’s latest move in an ongoing suppression of rights lawyers and activists in China. Pu’s supporters are linking the prosecution of Pu Zhiqiang more broadly to the Chinese regime’s inconsistent application of the rule of law, its human rights violations, and the lack of democracy in China.

In the morning, Beijing police and plainclothes police had cordoned off the Beijing No. 2 Intermediate People’s Court, checked the identifications of passers-by, and drove the nearly 50 protesters, a dozen American, European, and Australian diplomats, and two dozen Chinese and foreign journalists some distance away from the courtroom, according to an eyewitness who spoke to Epoch Times on condition of anonymity.

While police in uniform showed restraint, security officers in plainclothes, often wearing yellow smiley-face stickers, behaved particularly aggressively, the eyewitness added. In one scuffle, a plainclothes officer hit an expat, and the expat returned the blow.

Instances of milder police action were caught on camera, including shoving a Chinese man to the ground as he called out for freedom of speech and democracy. That episode was circulated widely.

Plainclothes and uniformed officers were also caught shoving Dan Biers, a diplomat with the U.S. Embassy in Beijing, as he read out a statement to reporters covering the Pu Zhiqiang trial.

“Lawyers and civil society leaders such as Mr. Pu should not be subject to continuing repression, but should be allowed to contribute to the building of a prosperous and stable China,” said Biers as the security officers shoved him, shouting “go!”

The first day of Pu’s trial was uneventful. It began at 9:00 a.m., lasted three hours, and only his wife was permitted to attend.

Mo Shaoping, Pu’s defense lawyer, told Reuters that Pu had admitted that he wrote the seven microblog posts, apologized if he “caused injury to other people” with the posts, and declared that he had “no intention to incite ethnic hatred or pick quarrels and provoke trouble.”

He entered a plea for not guilty. “This is really a case of freedom of expression, in which no harm to anyone has been proven,” Mo told The Associated Press after the trial.

Pu Zhiqiang had made unflattering comments about some Chinese regime officials in three of his Weibo posts. In one post, Pu mocked Mao Xinyu, the grandson of Mao Zedong and army general, and Shen Jilan, an octogenarian official whom political commentators uphold as proof that the regime’s legislature is no more than a rubber stamp. (Shen has never vetoed any motion.)

In other posts, Pu denounced in sometimes colorful language the Chinese regime’s harsh policies against Tibetan and Uyghur ethnic minorities.

In another post, Pu wrote: “If you say Xinjiang belongs to China, then don’t treat it like a colony and don’t act like conquerors and plunderers.”

Dilxat Raxit, a spokesman with the World Uyghur Congress in Germany, disagrees with the Chinese regime’s persecution of Pu Zhiqiang for his supposedly ethnically insensitive Weibo posts.

“In China, the law is a lie,” Raxit told Epoch Times in a telephone interview. “Everyone who appears to challenge the law, even tactfully, will pay the price.”

“The international society should look out for Pu Zhiqiang, who spoke out for what is right.”

Luo Ya and Juliet Song contributed to this article.