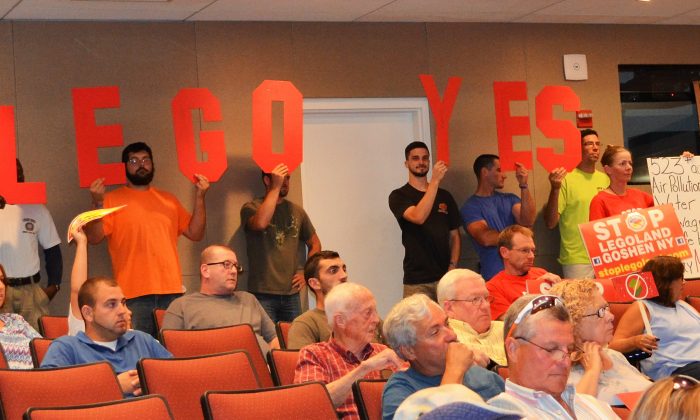 GOSHEN—The Goshen Town Board held a public forum on July 11 to hear views on changes to the town comprehensive plan and the creation of a commercial recreation overlay zoning district, steps necessary to bringing a proposed LEGOLAND theme park to the town.

About 300 people attended the forum, many wearing red t-shirts with a crossed out LEGO to show their opposition to the project. Along the back of the auditorium of the Orange County Emergency Services building, two groups held up large letters: LEGO YES and NO LEGO.

More public hearings are planned. Town Supervisor Doug Bloomfield reminded residents to attend a planning board scoping session on July 21 so their comments could be recorded. Town Attorney Richard Golden said other public hearings will be held after a draft environmental impact statement is published.

Golden explained to the audience the approval process. He said the first local law modifies the comprehensive plan.If that is approved, the second one is to rezone the site by creating an overlay district.

Based on audience responses to speakers and the number of red shirts in the audience, the for/against ratio was estimated at about 60 to 40.

The zoning change, Introductory Local Law No. 6 of 2016, would be limited to accommodating a LEGOLAND New York theme park in the town. Golden said that, even if the LEGOLAND project does not go through, no other entities could take advantage of the rezoning. “It does not stay in effect for somebody else to come in and say ‘I want to take advantage of it now,'” Golden said.

People, both for and against the project, spoke to the Board. Goshen resident and President of the Orange County Chamber of Commerce, Lynn Cione, supported the theme park citing the need for development.

“We are desperate for ratables here, but good ratables,”  said Cione, the former executive director of the Goshen Chamber of Commerce. “It’s a huge honor for [LEGOLAND] to come here,” she said. “I want you to consider and change the zoning so that we can meet the needs of Goshen, not just for today, but in the future.”

Speakers talked about the town’s quality of life. Maureen Halahan, president and CEO of the Orange County Partnership said commercial projects that have come to the county in recent years have improved the quality of life for residents.

“What do all these projects have in common? They were all opposed at the time of their development,” Halahan said. She asked the board “to help us grow more jobs, more capital investment, and create an environment here where we can stimulate our economy and grow for the future.”

Michael Torelli said the town needs better a balance of residential to commercial development, which is now a ratio of three to one, he said.

What the project would give the town in taxes will be minuscule, predicted resident Glen Holt. He advised the board not to change the zoning.

Bloomfield said the town negotiated a deal before they would even talk with park developers. If the park is built, the town would receive 65 cents of the first two million tickets and 20 cents for every ticket after that. He said this was not what the park would pay in taxes.

Laurie Artios said she and her friends want the park. She hoped the town would no longer be called “slow motion Goshen” and catch up with the rest of the county. “I’m very excited for LEGOLAND,” she said.

How much more of a good clean ratable can we ask for?
— Mary Israelski, Goshen Resident

Goshen resident Debra Corr, who opposed the park, called it a “glorified carnival.”

Town resident and business owner Brent Kunis said, “You’d think someone was opening up an asbestos factory in the middle of the town.” He said the park will bring the demographic that every municipality wants, “2 to 12 year-olds coming in with their parents.”

Bill Fioravanti, director of business attraction for the Orange County Partnership, told the board the LEGOLAND park is not like any other project in the county.

“This is going to take us into a whole new stratosphere when it comes to tourism. A huge opportunity for us economically.”

The same day as the hearing, the Goshen Village Board approved a bid to test a well for groundwater supply in response to a request from LEGOLAND representatives to get water from the Village. Mayor Kyle Roddey said the village had to test for more water whether or not LEGOLAND is built.

Bloomfield thanked all the speakers “for having the courage to come up to the mic and talk, no matter what your position.” He reminded residents that they should bring their concerns and comments to the scoping session on July 21. Concerns will be recorded and given a response as the project is vetted and reviewed.

The local law to amend the town’s comprehensive plan, Introductory Local Law No. 5 of 2016, is on the Town website  as well as Local Law No.6 to change the zoning.