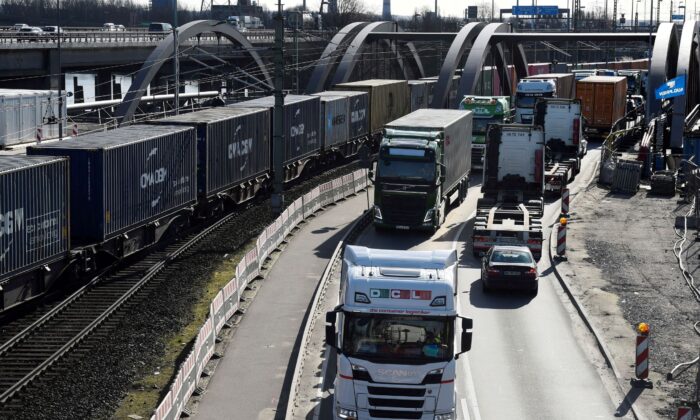 Containers are transported to loading terminals in the port in Hamburg, Germany on March 11, 2020. (Fabian Bimmer/Reuters)
Economy

BERLIN/FRANKFURT—German business morale deteriorated for the fourth month running in October as supply bottlenecks in manufacturing, a spike in energy prices and rising COVID-19 infections are slowing the pace of recovery in Europe’s largest economy from the pandemic.

The Ifo institute said on Monday that its business climate index fell to 97.7 from an upwardly revised 98.9 in September. This was the lowest reading since April and undershot the 97.9 consensus forecast in a Reuters poll.

The weaker-than-expected business sentiment survey was followed by a grim outlook from Germany’s central bank, which said in its monthly report that economic growth was likely to slow sharply in the fourth quarter.

The Bundesbank added that full-year growth was now likely to be “significantly” below its 3.7 percent prediction made in June.

“Sand in the wheels of the German economy is hampering recovery.”

Half of all industrial companies are planning to hike prices due to the continuing supply problems, which is a record high in the survey, Ifo economist Klaus Wohlrabe said.

The bottlenecks for intermediate goods and raw materials are spilling over from manufacturing to other sectors of the economy too, such as retailing, meaning not every Christmas present will be available for delivery in time, Wohlrabe added.

The supply problems would slow down growth to roughly 0.5 percent in the fourth quarter, Wohlrabe said.

The German economy expanded by 1.6 percent quarter-on-quarter in the three months from April to June.

The Federal Statistics Office will publish a flash estimate for GDP growth in the third quarter on Friday. Analysts predict a quarterly expansion of 2.2 percent from July to September.

The government on Wednesday is likely to slash its forecast for economic growth this year, after leading institutes cut their joint forecast to 2.4 percent from 3.7 percent last week. For 2022, the institutes predict 4.8 percent growth.

In addition to the supply problems, the spike in gas and energy prices is complicating the recovery, Gitzel added.

Other analysts pointed to rising COVID-19 infections in Germany, which could lead to renewed restrictions for retailers, bars, and restaurants over the winter months.

In addition, the current coronavirus wave is leading to factory closures, especially in Asia, which will exacerbate the material shortages in Germany, Kraemer added.

“The German economy is unlikely to grow much in the fourth quarter. Stagflation is on the horizon for this quarter at least,” he said.

By Michael Nienaber and Balazs Koranyi