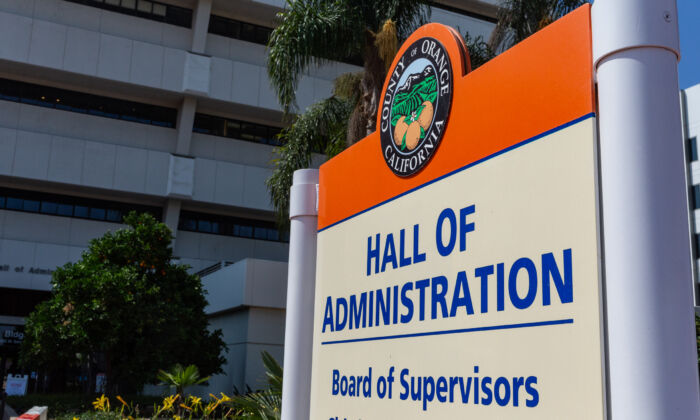 The Orange County Board of Supervisors voted June 7 to direct county officials to investigate any legal or financial risks with the county’s involvement with the Orange County Power Authority amid several controversies within the agency.

The Orange County Power Authority was set up by the county in late 2020 as a local sustainable energy alternative to Southern California Edison; on April 1, it launched its commercial electricity service.

In the two months since its launch, however, the agency has faced a series of controversies—including higher prices for customers than originally advertised, calls by the agency’s board members for CEO Brian Probolsky to resign, and a whistleblower legal complaint filed by Probolsky claiming board members are scheming to remove him as CEO, among other things.

Meanwhile, the county Board of Supervisors is seeking to be involved with the Power Authority’s board.

In order to pro-actively address any potential risks for the county, however, the Board of Supervisors unanimously approved Supervisor Katrina Foley’s supplemental motion to direct the county’s counsel and CEO to look into any risks it might face in its involvement in the agency.

“My request today is that both the CEO and county counsel review for this board any potential legal or financial risks so we as a board have the facts in front of us and we’re on track to be formally to be a full member of the Power Authority by the end of this calendar year,” Foley said. “As I understand it, we do not have full authority status at this time.”

Foley said she thinks the Power Authority’s issues stem from mismanagement and could benefit from guidance from the Board of Supervisors.

“From my perspective, it’s really a management issue,” Foley said ahead of the vote. “And … we can as a board give direction to the representatives who represent us at the Power Authority, so that we can ensure that it’s being managed in the way that it was intended.”

Foley also said she was also concerned because the agency was approved last November as a supplemental item, so it did not go through the “traditional” review by the county counsel and CEO, as it would have if it were a typical agenda item.

“As the member of the Power Authority as appointed by this board … we thoroughly vetted the situation. Yes, it came on a supplemental [item], but it was thoroughly vetted,” Wagner said. “I am certain that what’s going to be demonstrated by the review which as I understand from counsel has really already been done … they’ve looked at these documents, the risk to the county is not there …”

Some of the questions Foley said she would like addressed are finding out what the county’s financial obligation would be if the Power Authority fails, what guarantees do ratepayers in the unincorporated communities have if prices go beyond what was promised, and any other risks the county has for being involved in the agency.

The county counsel and county CEO are expected to report to the board on their findings on July 7.

A spokesperson for the OC Power Authority Board did not reply to a request for comment.