Super Tuesday: Biden and Sanders Projected to Be Main Winners 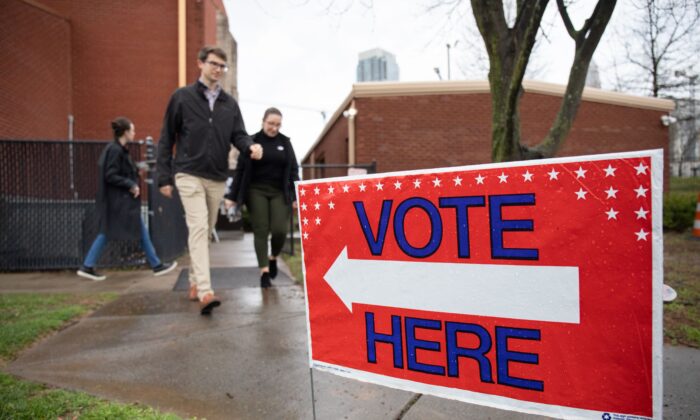 Fourteen states, one U.S. territory, and Democrats living abroad voted in primary elections and caucuses on a day that could majorly influence who will become the Democratic contender to challenge President Donald Trump in November for the presidency.

Republicans also voted for their presidential nominee in most of the 14 states. Meanwhile, Alabama, Arkansas, California, North Carolina, and Texas are also holding other elections for both Republicans and Democrats, including Congressional primaries.

Here was how the night unfolded:

The Associated Press has called a victory for Biden for Texas, where 228 delegates were on offer.

With 82 percent of votes in at 2 a.m. ET, poll results published by Real Clear Politics show Biden leading at 33.1 percent, followed by Sanders at 29.7 percent. So far Biden has been awarded 56 delegates, and Sanders has been awarded 50.

Republican Jeff Sessions, a former attorney general under President Donald Trump, was headed to a likely runoff in Alabama as he sought on Tuesday to advance his bid to return to the U.S. Senate in a wave of congressional primaries.

Sessions, who in 2016 was the first Senate Republican to endorse Trump before joining his administration, is seeking his party’s nomination to challenge incumbent Democrat Doug Jones.

He is to face first-time candidate Tommy Tuberville, the former head coach of the Auburn University football team, in a runoff on March 31. The two were essentially tied on Tuesday night, with 64 of 76 counties reporting.

Trump has not endorsed any of the contenders.

The president had forced Sessions out of the Justice Department after repeatedly criticizing his decision to recuse himself from the probe into Russian meddling in the 2016 election.

The future of Sen. Elizabeth Warren’s presidential campaign was in serious doubt after she finished a weak third in Tuesday’s Democratic primary in her home state of Massachusetts.

Warren appeared set on remaining in the race, at least for now. Speaking to supporters in Detroit ahead of next week’s Michigan primary, she introduced herself as “the woman who’s going to beat Donald Trump.” She encouraged supporters to tune out the results and vote for the person they believed would be the best president, saying: “Prediction has been a terrible business and the pundits have gotten it wrong over and over.”

“You don’t get what you don’t fight for. I am in this fight,” she added.

Joe Biden and Bernie Sanders appear to be in a close race in Texas, where there are 228 delegates at stake. According to poll results from Real Clear Politics, with 52 percent of votes in, Biden is leading at 29.1 percent, followed by Sanders at 28.8 percent.

Just minutes after 11 p.m. ET, The Associated Press called a win for Sanders in California, which has 415 delegates up for grabs.

Sanders Seeks For Polls to Stay Open Longer in California

According to the injunction, “multiple polling locations in the County have experienced extreme wait times for individuals to vote, including wait times up to four hours to cast a ballot.”

The Associated Press has called a victory for the president in the Republican Presidential Primary in California.

The Associated Press has called a victory for Bernie Sanders in Utah.

Biden: ‘We are very much alive’

“We are very much alive,” the former vice president said to a crowd of supporters in Los Angeles. “And make no mistake about it. This campaign will send Donald Trump packing.”

Biden is also projected to win in the states of Minnesota and Massachusetts. The Associated Press has called his victory for both states.

Biden’s speech was temporarily interrupted by a few people who rushed onto the stage shouting “let dairy die” to protest against the dairy industry. The protesters were from the group Direct Action Everywhere.

Sanders: ‘We are going to win the Democratic nomination’

Speaking to a crowd of supporters in Vermont late Tuesday, Bernie Sanders expressed confidence he will win the Democratic nomination.

“But tonight I tell you with absolute confidence, we are going to win the Democratic nomination. And we are going to defeat the most dangerous president in the history of the country.”

Sanders is projected to win Colorado and Vermont in the Democratic presidential primary race.

The Associated Press has called a win for Joe Biden in Tennessee and Arkansas in the Democratic presidential primary race.

Polls were scheduled to close across the nation from 7 p.m. ET to 11 p.m. ET.

Bloomberg scored a victory in American Samoa on Tuesday, taking up five of the six delegates on offer, while Rep. Tulsi Gabbard (D-Hawaii) took one.

Bloomberg, who has yet to win any states, has spent $500 million of his own money on campaign advertising.

“No matter how many we win tonight, we have done something no one else thought was possible,” he said.  The feat was rising “from 1 percent in the polls to being a contender for the Democratic nomination for president,” Bloomberg said.

Cunningham, Tillis to Face-Off in November

Cal Cunningham has won the Democratic nomination for the Senate in North Carolina, setting the stage for a face-off in November against incumbent Republican Sen. Thom Tillis, who was renominated.

Cunningham is an Iraq War veteran. He also served in the North Carolina Senate from 2001 to 2003.

It will be the first reelection bid for Tillis, who won his seat in 2014.

Trump has won the Republican Presidential Primary in multiple states including in Alabama, Oklahoma, Massachusetts, Tennessee, and Arkansas.

The president has taken to Twitter to thank multiple states for his victory in the Republican primary race, including Vermont, North Carolina, Alabama, Oklahoma, Massachusetts, Tennessee, Maine, and Texas.

Biden is projected to win the state of North Carolina and Alabama as polls closed at 7:30 p.m. ET and 8 p.m. ET, respectively. The Associated Press has called his win for both states.

Former Vice President Joe Biden is projected to win the Virginia Democratic primary as the first polls close on Super Tuesday in Virginia and Vermont at 7 p.m. ET.

Biden recently won South Carolina’s primary on Saturday. He has received endorsements from former South Bend, Indiana mayor Pete Buttigieg and Sen. Amy Klobuchar (D-Minn.). Both had left the race in the run-up to Super Tuesday.

Bernie Sanders is projected to win the Democratic presidential primary in his home state of Vermont. He has represented Vermont in the Senate since 2007. Sanders and his wife voted in Vermont earlier in the day.

Healthcare is Top Concern For Many Voters: Edison Research

Voters in five of the bigger states holding primary elections on Tuesday—at least seven out of 10 voters in California, Texas, Virginia, North Carolina and Tennessee—also said the coronavirus outbreak was a factor in their decision, the poll said. Those were the only states in which the question was put to voters.

The Super Tuesday primary elections were so far free of any signs of interference, said national security professionals who gathered in Northern Virginia in an unprecedented monitoring effort to counter cyberattacks and foreign disinformation.

“On the specifics of today, we have not seen any acute increase in any misinformation,” said Christopher Krebs, director of the Cybersecurity and Infrastructure Security Agency of the Department of Homeland Security.

Representatives from the Homeland Security Department, FBI, National Security Agency and U.S. Cyber Command were positioned at the Cybersecurity Infrastructure Security Agency (CISA) to respond rapidly to any attacks on Tuesday’s presidential primaries.

State and local election officials spread across the country were also connected to the nerve center in Virginia in case of suspicious cyber incidents.

In a joint statement on Monday, the heads of each participating agency warned of “sharp consequences” for “foreign actors” that attempt to meddle in the 2020 election.

“The level of coordination and communication between the federal government and state, local and private sector partners is stronger than it’s ever been,” the statement read.

Tennessee to Extend Voting Hours at Polling Sites After Storms

Several Tennessee polling places will stay open at least an extra hour to allow Democratic primary voters on Super Tuesday to continue to cast ballots after the state was hit by deadly storms overnight, the state’s Democratic Party announced on Twitter.

The party filed suit to extend hours and the decision was made by a judge after tornadoes rolled through the state capital, killing at least 22 and leaving a wide path of destruction.

What’s At Stake on Super Tuesday

Over a third of delegates, or around 34 percent, will be awarded in Tuesday’s Democrat nominating contests—1,357 out of a total of 3,979 pledged delegates nationwide. In February, only less than 5 percent of delegates were up for grabs from four states voting.

A candidate needs to win at least 1,991 delegates to win the Democratic nomination on the first ballot by the party’s national convention in July. Democrat candidates must finish with at least 15 percent of the vote for them to win any delegates in a given state—either in the statewide total or an individual congressional district.

California and Texas, the two most populous states in the country, have the largest numbers of delegates up for grabs, at 415 and 228 respectively.

Republicans will be able to vote for their presidential nominee in most of the 14 abovementioned states. Trump needs 1,276 delegates out of 2,551 to win the Republican nomination.

Virginia is the only state not to hold a presidential primary for a Republican nominee. WHSV reported that state Republicans will select a nominee at their convention.

Alabama, Arkansas, California, North Carolina, and Texas are also holding other elections for both Republicans and Democrats, including Congressional primaries.