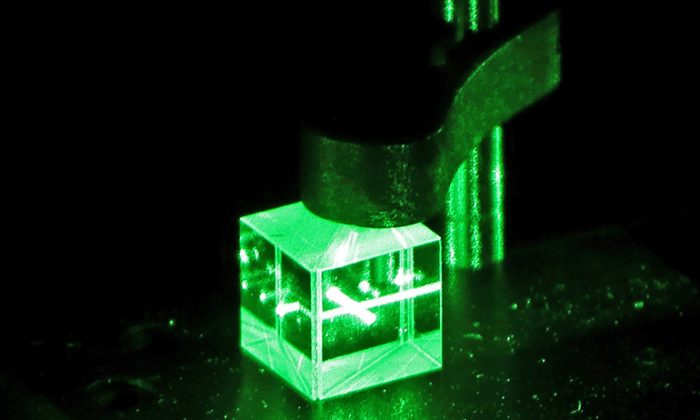 The dream of the researchers is to one day apply the technology to shed light on the spatial structure of biomolecules, such as proteins. (ETH Zurich)
Science

Conventional MRI technology, widely used in hospitals, can typically resolve details of up to one tenth of a millimeter, for example in cross-sectional images of the human body.

Researchers are working on significantly increasing the resolution of the technique, with the goal of eventually imaging at the level of single molecules—a more than one million times finer resolution.

Detecting the signal from a single hydrogen atom is an important milestone toward that goal.

In standard hospital instruments, the magnetization of the atomic nuclei in the human body is inductively measured using an electromagnetic coil.

“MRI is nowadays a mature technology and its spatial resolution has remained largely the same over the last ten years. Physical constraints preclude increasing the resolution much further,” Degen says.

In their experiments, reported in the journal Science, researchers measured the MRI signal with a novel diamond sensor chip using an optical readout in a fluorescence microscope.

The sensor consisted of an impurity in diamond known as the nitrogen-vacancy center. In this case, two carbon atoms are missing in the otherwise regular diamond lattice, while one of them is replaced by a nitrogen atom. The nitrogen-vacancy center is both fluorescent and magnetic, making it suitable for extremely precise magnetic field measurements.

For their experiment, the researchers prepared an approximately 2×2 millimeter piece of diamond such that nitrogen-vacancy centers formed only a few nanometers below the surface.

By an optical measurement of the magnetization, they were in several cases able to confirm the presence of other magnetic atomic nuclei in the immediate vicinity.

“Quantum mechanics then provides an elegant proof of whether one has detected an individual nucleus, or rather a cluster of several hydrogen atoms,” says Degen.

The researchers also used the measured data to localize the hydrogen nuclei with respect to the nitrogen-vacancy center with an accuracy of better than one angstrom (one ten-millionth of a millimeter).

“This is an important intermediate step toward the mapping of entire molecules,” Degen says.

In a next step, the researchers envision imaging a small molecule with their nano-MRI device. Even if it would become possible to map a large number of atoms, however, it is neither the aim nor practical to investigate an entire human body at atomic level with this technology.

The dream of the researchers is to one day apply the technology to shed light on the spatial structure of biomolecules, such as proteins.

Crystallizing proteins is challenging and sometimes impossible, researchers say. If the ETH physicists achieve their goal, a single molecule would in principle suffice for determining the structure.

Another advantage of nano-MRI is that the molecules can be labeled by isotopes, providing a means for site-specific image contrast. This would help biologists tackle issues relating to protein functions more effectively.