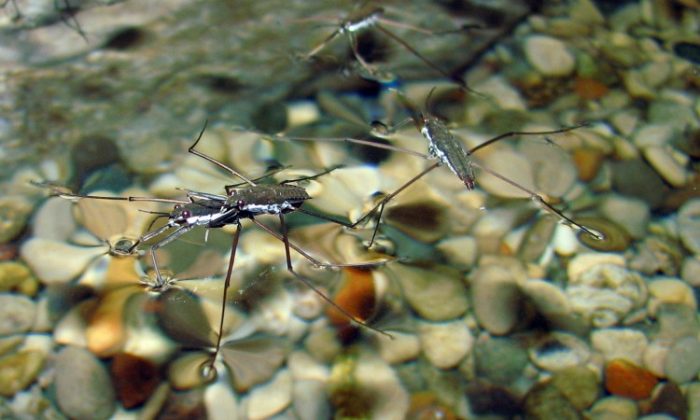 The new material, made of a nanocellulose-based aerogel, is able to carry a thousand times of its weight. (Courtesy of Olli Ikkala)
Science

Imagine an ultra lightweight material so buoyant that a one-pound boat constructed from it could carry 1,000 pounds–equivalent to five kitchen fridges.

This amazing technology has now been derived from plant cellulose by Finnish scientists. It is also environmentally friendly, strong, flexible, and one of the lightest solid substances in the world.

The material was designed to mimic the feet of a water strider, an insect capable of walking on water, and is made of a nanocellulose-based “aerogel.” Aerogels can be produced from a variety of sources, such as silica in beach sand, with some being so light, they are referred to as “solid smoke.”

“These materials have really spectacular properties that could be used in practical ways,” said researcher Olli Ikkala at Helsinki University of Technology in a media release.

Suggested applications range from toys and miniaturized military robots to sensors for detecting pollution and devices to clean up oil spills. The material can absorb vast amounts of oil without sinking.

According to Ikkala, the material is environmentally sustainable as cellulose is the most abundant polymer on Earth. Cellulose is the main component of plant stems, leaves, and roots, and is what gives wood its strength.

Traditionally, cellulose has been used commercially to produce paper and textiles. But the development of highly processed nanocellulose has expanded its application to advanced structural materials similar to metals.

“It can be of great potential value in helping the world shift to materials that do not require petroleum for manufacture,” Ikkala explained. “The use of wood-based cellulose does not influence the food supply or prices, like corn or other crops.”

“We are really delighted to see how cellulose is moving beyond traditional applications, such as paper and textiles, and finding new high-tech applications.”

The findings were presented at the 243rd National Meeting & Exposition of the American Chemical Society. The symposium focused on an emerging field called biomimetics, in which scientists draw inspiration from nature, adapting biological systems in plants and animals for application in fields such as medicine and industry.