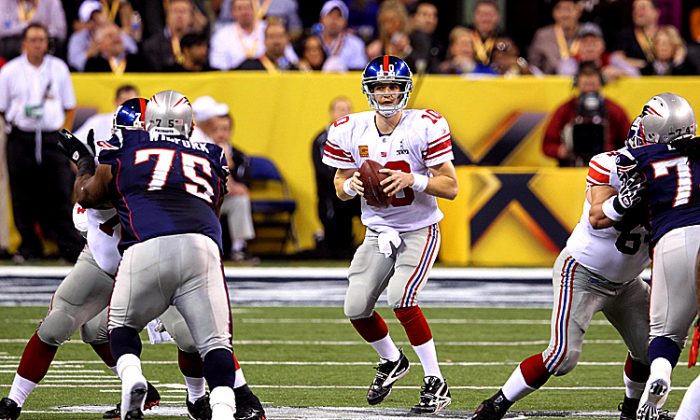 Tom Brady (12) was called for an intentional grounding in the end zone on the Patriots’ first play. (Gregory Shamus/Getty Images)
NFL

INDIANAPOLIS—Super Bowl XLVI represented the chance for either the New York Giants or the New England Patriots to win their fourth Super Bowl.

New England won the coin toss and deferred. Eli Manning and the New York Giants would begin on offense.

The Giants got their first first down courtesy of Victor Cruz, their leading receiver showing good rhythm in the passing attack. Manning and company managed to move the ball through the air until they reached New England territory.

From there, the Giants tried to get their running game going, but the Patriots wouldn’t have any of it. New England’s defense stiffened and forced New York to punt the ball away, after sacking Manning twice.

Tom Brady and the Patriots began on their own 6-yard line. On their first play from scrimmage, the Giants pass rush got to Brady who was called for intentional grounding. The result of the play was a safety and New York took a quick 2–0 lead.

On the Giants next possession, Bradshaw broke a big 23-yard run off the left tackle on a 2nd-and-2 play.

On a 3rd-and-11, Manning completed a pass, which was fumbled away to the Patriots, but because New England was called for 12 men on the field, the Giants kept the ball. Two plays later, Victor Cruz caught a 2-yard TD pass from Manning.

With 3:18 left in the first quarter, the Patriots ran just their second play on offense, resulting in a loss of one yard. It had been all Giants to this point. But Brady tossed a 15-yard pass to Deion Branch on the next play for the Pats first first down of the game.

Brady followed that up with a 19-yard pass to Wes Welker and the Patriots were back in business.

At the end of the first quarter, the Giants led 9–0 with the Patriots knocking on the door.