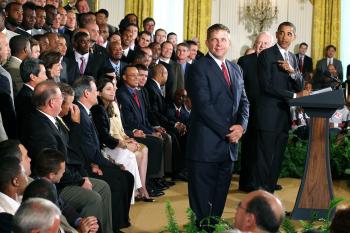 To the tune of "When the Saints Go Marching In", the New Orleans Saints arrived in the White House, invited by Barack Obama himself, on Monday, at 9:20 a.m., local time.

In a televised ceremony, he congratulated the actions of the coaches and players, and the commitment of the owner, to many warm rounds of applause.

This act of celebrating was not only intended from the White House, but from “all across America.”

The president reminded Americans that during Hurricane Katrina in 2005, the Saints spent the entire season on the road since the Superdome was used as an emergency shelter.

“And back then, people didn’t even know if the team was coming back. People didn’t know if the city was coming back. Not only did the team come back -– it took its city’s hands and helped its city back on its feet. This team took the hopes and the dreams of a shattered city and placed them squarely on its shoulders,” said Obama, even though, he himself, declared that he was a Chicago Bears fan.

On Sunday, Feb. 7, 2010, the New Orleans Saints won 31-17 against the Indianapolis Colts, making it their first Super Bowl victory.

While the Saints victory helped boost the morale of the people of New Orleans, another more recent tragedy in the Gulf still needs time to heal.

Near the end of the speech, Obama also stated “that a procedure to prevent any more oil from spilling with a cement plug appears to have succeeded,” which will mean good news to the Gulf Coast.