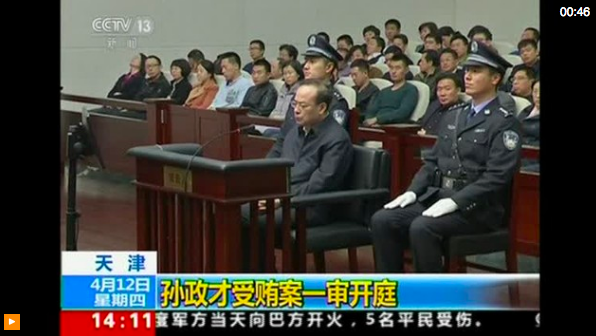 Sun Zhengcai, 54, was abruptly removed last July from his post as Communist Party chief of southwestern Chongqing, one of China’s most important cities, to be replaced by Chen Min’er, who is close to current leader Xi Jinping.

Sun is the latest casualty of Xi’s unrelenting war on graft—which has also served as a mechanism for Xi to eliminate officials in the Party’s opposition faction who challenge his rule.

Until last year, Sun, one of the youngest of the 25 members of the Party’s decision-making Politburo, had been considered Xi’s successor.

Prosecutors in February had charged Sun with accepting “huge sums” in bribes during various posts going back 15 years in Chongqing, Beijing, the northeastern province of Jilin, and during his term as minister of agriculture.

At a hearing on April 12, Sun was charged with illegally accepting cash and gifts worth a total of over 170 million, the court said on its official social media account, adding that its verdict would be released later.

“I severely violated discipline and the law,” Sun said in videos of his statement to a court in the city of Tianjin released by state broadcaster CCTV. “I completely accept (the charges). I sincerely admit my guilt and express regret.”

Sun is certain to be found guilty as the courts are controlled by the Party and will not challenge the accusations against him.

Since coming to power in 2012, Xi has presided over a sweeping corruption crackdown, targeting members loyal to former leader Jiang Zemin. Previous media reports have revealed Sun was Jiang’s pick for a loyalist successor to become Party leader.

During last year’s critical Party conclave, the 19th National Congress, Sun was named along with several other key Jiang faction members, such as Zhou Yongkang, Bo Xilai, and Ling Jihua, as co-conspirators “in a plot to usurp the Party leadership and seize power.”

In recent months, Chinese media have also exposed Sun’s affairs with multiple mistresses, who received financial benefits through connections to him.