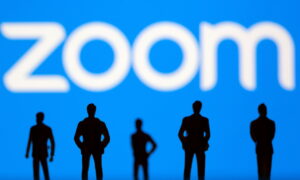 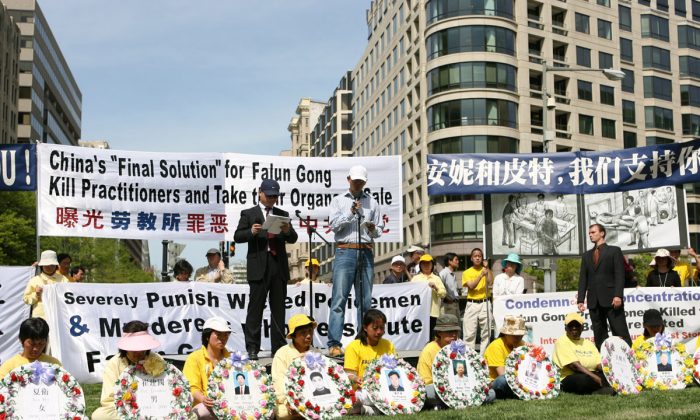 The two key sources who revealed live harvesting of Falun Gong practitioners’ organs at Sujiatun Concentration Camp spoke publicly for the first time on April 20, at McPherson Square, Washington, D.C. At a press conference attended by hundreds of people, they testified about the CCP harvesting organs from living Falun Dafa practitioners.

Below is the full text of the statement made by one of the sources, Peter:

I am only a common journalist, and Epoch Times and I first reported together the facts about harvesting organs from living Falun Dafa practitioners in the Liaoning Provincial Thrombosis Hospital of Integrated Chinese and Western Medicine.

I believed originally that through exposing this evil crime, it can be stopped, those who sinned in history can be punished, and the detained Falun Dafa practitioners can be released so that their lives can be saved. This is a most tragic, inhumane crime.

I am quite upset that the CCP has transferred all Falun Dafa practitioners detained in Sujiatun and destroyed the evidence. The CCP has once again deceived the international community and the media, and it has seduced the international community with economic profit, threatening all witnesses, agencies and countries that wish to expose the facts about the CCP’s harvesting of organs from living Falun Gong practitioners.

Today is the day that Hu is meeting with Bush, and it is the moment when the global media and the world’s people are paying attention to China. I chose to stand out on this day publicly, to condemn the CCP’s crimes at Sujiatun. I have no regard for my own life or death. I want to use my life as evidence to expose the sins of the CCP in harvesting organs from living Falun Gong practitioners.

I know the CCP will not leave me alone since I have reported this genuine situation, but I am still willing to stand out and risk my life in order to reveal these facts about the persecution. At the same time, I want to tell everyone, as I have repeatedly told you, that the crimes at Sujiatun are only the tip of the iceberg in the nation-wide persecution. Stealing and selling organs from Falun Gong practitioners and other prisoners is happening in labor camps all over the country.

Before and after 2000, I selectively contacted some people in China with different careers and societal backgrounds to collect information from different angles, which helped me gain new understandings of the Chinese government’s statements, actions, and current situation.

In 2003, when the SARS epidemic was widespread in China, I traveled from Hong Kong, at the south end of the country, to Heilongjiang Province, at the north end, and witnessed the corruption and dirtiness of the CCP system. I contacted many officials in Shenyang City, Liaoning Province. Their ways of deceit, greed, illegal behavior are beyond the imagination and shockingly evil. The new and old policies that the Central Government has established, the government agencies, the Court system, and the power that is bestowed by the people are all sacrificed when these officials extort people’s money. When I contacted these officials, I realized for the first time that an underground camp existed at Sujiatun.

However, it is very difficult to investigate a secret location in such a big city, and to prove its existence. In the past three years, I have consumed large amounts of manpower, material supplies, and financial resources, but have finally found this facility in Sujiatun, where many Falun Dafa practitioners were detained, and their cornea, organs, and bone marrow harvested live, and then their bodies cremated. Even their hair is made into wigs, and their skin and body fat is sold. The remainder of their bodies is then cremated to destroy all evidence. Ladies and gentlemen, can you believe that such crimes are still underway in other regions in China?

I have collected information from websites of organ transplant centers in Tianjin City and Shenyang City in China. The advertising on these sites is aimed at attracting foreign patients to undergo live organ transplant operations in China, providing large quantities of organs.

On the English version of the website of the China International Transplant Network Assistance Center (CITNAC), it is posted that it only takes one week to one month to find a kidney match. Meanwhile in the United States, the waiting period is two years or longer. We all know that kidneys and other organs are very hard to keep fresh, with a window of only 24-48 hours for a kidney, and even shorter for a heart. It is clearly shown on the Tianjin City Eastern Organ Transplant Center website that transplant procedures have largely increased in frequency since 2001.

Some organ transplant experts have expressed that in order to maintain such a quick process of organ matching between patients and donors, there must be an underground channel of live organs existing in the Shenyang City region. Many doctors and nurses who answered the phones in the hospitals and transplant centers in Beijing and Shenyang Cities, admitted openly that the donors are all alive and very healthy, and they even directly admitted that they are Falun Gong practitioners. When specifically asked more questions, they would not talk on the phone, saying that it is a sensitive topic, and “Let us talk after you arrive here.”

Currently there are many flyers posted on the electricity poles about kidney or other organ transplants, and many advertisements appear on the Internet from Transplant Hospitals and Centers in China. China has become a large organ transplant country. The international community has learned that if one needs an organ transplant quickly, one needs to go to China, where such channels exist.

This crime is committed by a network of corporations and participants who steal and sell Falun Gong practitioners’ organs. It involves guards in the labor camps, surgeons, nurses, the government officials of the public health system, police officials, central government officials, black market organ traders and overseas organ transplant traders. It is an enormous crime beyond our imagination.

Ms. Annie’s ex-husband is a late-stage cancer patient now, and is receiving chemotherapy in a hospital in Canada. He tried to escape China, and did not want to join in the crime of harvesting Falun Gong practitioners’ organs, and wanted to quit. He then was warned and threatened. His wife was stabbed deeply on the left side of her stomach when she tried to protect him. He is an orphan of a CCP hero. He confessed to his wife, burned five deep marks onto his arm, and told her all of his secrets. Annie stepped forward to help pay back her ex-husband’s sins.

More than one doctor and employee involved in the Sujiatun organ transplant operations have testified that the organs are all harvested from living Falun Gong practitioners.

The CCP’s persecution policy on Falun Gong practitioners is that killing is counted as nothing, and that there is no need to verify identities.

I have received many anonymous calls on my cell phone, including some from my previous colleagues and bosses, wishing that I would stop revealing what I have found, so that it could go from being a big incident to a small one, and then from a small one to nothing. I do hope my investigation is a mistake. But even if there is only a one percent possibility that it is true, we should step forward to expose it, and to stop such crimes, crimes that should not be accepted by anyone.