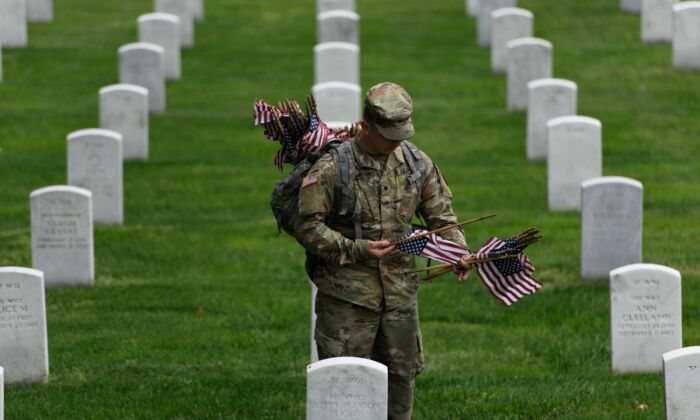 A member of the U.S. Army places American flags on a grave at Arlington National Cemetery on May 25, 2017. (Brendan Smialowski/AFP via Getty Images)
Social Issues

According to combined data from the Defense Suicide Prevention Office and a study published in the Journal of the American Medical Association, that’s the highest number of active duty Army member suicides on record since 1938.

Suicide rates within all military branches have continued to rise since 2015.

Compounding this trend is the number of U.S. soldiers and veterans who have taken their own life in post-9/11 wars.

Brown University published a study indicating that 30,177 active duty members and veterans have committed suicide. By comparison, the number of soldiers actually killed in post-9/11 war operations is 7,052.

Some experts say physically and mentally demanding industries like the military put people at an elevated risk for developing Post Traumatic Stress Disorder (PTSD). It’s one of the few mental health disorders that can be linked to a specific event.

McGraw is a licensed clinical psychologist and the owner of Flourish Mental Wellness in Scottsdale, Arizona. She has also worked with both active and veteran military members struggling with PTSD.

She says when people are feeling stressed, it can lead to feelings of hopelessness about their situation, which can spiral into thoughts of self-harm.

Another contributing factor is feelings of shame, which often factor into someone’s decision to take their own life.

A former Army engineer, Nelson was deployed to Iraq and Saudi Arabia during the U.S. Gulf War operations Desert Shield and Desert Storm in the early 1990s.

He wasn’t surprised to learn that his service branch’s active duty member suicide rates are at a historic high.

“As of now, they don’t have any reliable method of fixing us,” he said.

Further, Nelson noted that soldiers are often put in situations that can take a harsh toll on mental health.

He remembers how members of his platoon had to extract human remains from bombed-out vehicles. Nelson says the soldiers involved returned to the base at the end of the day looking “different.”

“I guess you just don’t talk about that kind of stuff,” he said.

Dr. Tracy Latz is an integrative psychiatrist and author with 35 years of experience dealing with suicide risk and PTSD suffering patients. She told The Epoch Times feelings of a lack of purpose also contribute to the problem.

“Veterans I have seen over the past few years report feeling like they and their comrades were used primarily as pawns for governmental political power rather than feeling [a] sense of real purpose in their duties.”

Compounding this, service members’ isolation and loneliness while stationed overseas or deployed to combat zones can be crushing.

A Blue Star Families Military Lifestyles survey from 2021 shows eight out of 10 active duty respondents have been separated from their families in the past 18 months. Moreover, 31 percent have been away for six months or longer.

The Department of Defence (DOD) began releasing an Annual Suicide Report in January 2019 as a means to track the escalating problem.

“The department is fully committed to preventing suicides in our military community. Every death by suicide is a tragedy,” the DOD posted on its website for the office of suicide prevention.

Latz noted that people suffering from PTSD could be dealing with an array of symptoms like poor sleep, flashbacks, and intrusive memories of the trauma they experienced.

This can lead to a fight-or-flight reflex, or situations that mimic the circumstances of their trauma.

Becoming hyper-vigilant to perceived danger is another symptom of PTSD.

Though symptoms of someone grappling with thoughts of self harm are not always easy to spot, there are some red flag signs to watch for.

“The main contributors to suicide are hopelessness and shame, so if someone is talking about feeling hopeless and like things will never change, that is a red flag,” McGraw said.

“Other red flags for suicide include increasingly isolating yourself, getting rid of things, especially important things, not sleeping, calling people to say goodbye or telling them how much they mean to them, and increased alcohol or drug use.”

McGraw notes that those symptoms alone don’t necessarily indicate a person has PTSD or is considering suicide, but suggest someone is struggling with their mental health and needs help.

Nelson says that traumatic, survival-based scenarios—like those often encountered by members of the military—rewire your brain and how it functions daily.

“It wears at you [PTSD]. It has both short-term and long-term effects, and we’re seeing that,” he said.

Both the VA and the DOD declined to comment when contacted by The Epoch Times.