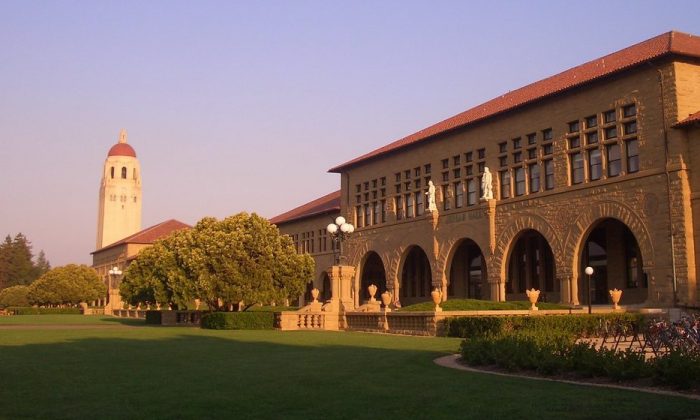 The Stanford University campus. Zhang Shoucheng was a well-regarded physicist and professor at the school. (Pere Joan/Wikimedia Commons)
Huawei

A Stanford University physicist and entrepreneur who was rumored to be in line for the Nobel Prize committed suicide on Dec. 1. His suicide has drawn attention to his record of achievement and his work to advance the objectives of the Chinese regime. It has also inspired speculation about what caused this gifted man to kill himself.

On the same day Zhang Shoucheng committed suicide, the chief financial officer of the controversial Chinese telecommunications company Huawei, Meng Wanzhou, was arrested. Chinese-language media have speculated there is a connection between the scientist’s death and Meng’s arrest, or between his death and U.S. investigations into intellectual property theft.

Zhang’s family has responded to these media reports with a statement: “There is no police investigation, and the authorities have no suspicions about Professor Zhang’s death. You will read that he committed suicide, and this is true. It occurred in San Francisco. But you will also read in the family statement that he had periodic bouts of depression.”

The family also stated: “There is no connection between his death and other events in U.S.–China relations, which has been speculated by some. This kind of misinformation is not only untrue but hurtful to Professor Zhang’s family, friends, and colleagues.”

The speculation about Zhang’s death is no doubt fueled by his connections with Huawei, which is at the center of U.S. concerns about intellectual property theft from the United States and the use of data to enable repression inside China, but also by his deep involvement in general with the Chinese regime.

In his career, Zhang had multiple connections with the regime, as a state-sponsored academic, a funder of technology projects in the West meant to benefit Beijing, as a recipient of state-sponsored funding meant to propel his venture-capital projects, as likely having connections with one of the more powerful individuals in China, and as a researcher whose discoveries were key to the regime’s goals.

Zhang was also recently appointed as a distinguished professor at ShanghaiTech University and tasked with establishing a new research institute there. Since September 2013, the president of ShanghaiTech University has been Jiang Mianheng—the eldest son of former Chinese Communist Party leader Jiang Zemin—who also has close ties to Huawei. ShanghaiTech was founded by the Shanghai municipal government and the state-run Chinese Academy of Sciences.

A November report by the Office of the U.S. Trade Representative lists DHVC as being part of China’s “web of entities” established in Silicon Valley “to further the industrial-policy goals of the Chinese government.”

Such venture-capital firms invest in a wide range of startups, then “to varying degrees have access to information, technology, and the ability to influence and potentially coerce management,” according to the “Section 301” report, an update on a prior investigation on China’s intellectual property theft practices released in March.

Zhang’s firm traces its funding to Chinese state-affiliated entities. An investment arm of the state-owned firm Zhongguancun Development Group (ZDG) has backed DHVC, among a number of other venture-capital firms in Silicon Valley.

When DHVC was first established in 2013, Beijing’s mayor attended the company’s signing ceremony in Silicon Valley, according to the report. A press release on the ZDG website explained that DHVC would focus on innovative tech developed at Stanford University and other nearby universities, for the purpose of steering projects to Beijing’s Zhongguancun tech hub to commercialize.

“Zhongguancun capital goes out and foreign advanced technology and human capital is brought in,” the press release read.

ZDG’s investment arm helped convince Chinese tech giants Alibaba and Baidu to contribute to DHVC’s first round of funding, raising the total to about $91 million, according to the report. iFlyTek, a Chinese voice-recognition company that has received Chinese state funding and works closely with China’s Ministry of Industry and Information Technology, has invested $5 million in DHVC.

The report also noted that Meta, an augmented-reality startup that’s among the 113 companies in DHVC’s portfolio, announced in September that it would lay off half its employees in Silicon Valley and move operations to China, “after the Chinese government pressured Chinese investors.”

DHVC also invests in Cohesity, a data management company that counts the U.S. Department of Energy and U.S. Air Force as clients, according to a Reuters report.

Zhang seems to have some connection both with Huawei, via DHVC, and with Jiang Mianheng, through his connections to ShanghaiTech.

Huawei’s smartphone P10 has a function named FingerSense, which allows users to use their knuckles to interact with the phone’s touchscreen. This technology was pioneered by Qeexo, a U.S. company.

Qeexo was founded in 2012. Its significant investors include Zhang’s DHVC and two other companies.

Like the Jiang family, Zhang came from Shanghai. In 1980, he went abroad and eventually became a naturalized U.S. citizen.

In 1999, Zhang was selected to join the Changjiang Scholars and Professors program by China’s Ministry of Education, an initiative to further develop higher education in China.

In 2008, Zhang was recruited into China’s Thousand Talents plan, a Beijing-led effort to attract top scientists and engineers from overseas to work in China, to conduct research at Tsinghua University.

Since then, Zhang was active in China’s academic community.

Zhang had made public statements expressing a desire to help China’s scientific development. In 2013, he became an academic at the Chinese Academy of Sciences.

In 2017, Zhang “discovered a new state of matter called topological insulator in which electrons can conduct along the edge without dissipation, enabling a new generation of electronic devices with much lower power consumption,” according to the U.S. National Academy of Sciences.

This research was seen as critical for further developing semiconductor chips with greater storage and processing capacity. That is an innovation the Chinese regime has aggressively supported to fuel its ambition to become a tech manufacturing powerhouse.

Apart from this, Zhang is famous for his work on the quantum Hall effect, the quantum spin Hall effect, spintronics, and high-temperature superconductivity. His passing marked a great loss to the field of physics.

Zhang had received numerous international awards since 2007 for his achievements, including the Oliver Buckley Prize, the Dirac Medal, the Europhysics Prize, the Physics Frontiers Prize in Fundamental Physics, and the Benjamin Franklin Medal. At the time of his death, he and his research team were floated as candidates for a Nobel Prize in Physics.

On Jan. 23, the state-run China News Service reported that Zhang was setting up a Frontier Science and Technology Research Institute within ShanghaiTech University. The report quoted Xu Li, the director of the Shanghai government’s Overseas Chinese Affairs Office, as saying that Zhang’s institute had the support of the office.

While the exact relationship between Jiang and Zhang is unclear, Chinese university heads are usually acquainted with all professors at their schools. The establishment of a new research institute would certainly happen only with the approval of the president.

Adding to the uncertainty, following Zhang’s death, all reports about the relationships between him and Chinese entities and prominent individuals have been deleted by Chinese internet censors.