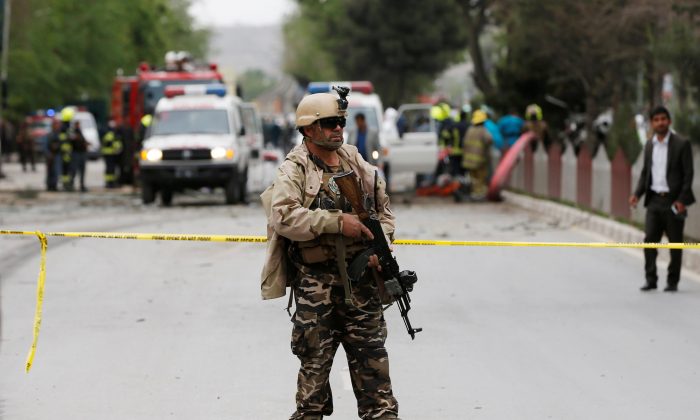 A member of the Afghan security force keeps watch at the site of a suicide attack in Kabul, Afghanistan May 3, 2017. (REUTERS/Omar Sobhani)
Middle East

KABUL–A police official said a suicide bomber had struck in the Afghan capital, Kabul, after a loud explosion was heard in an area close to foreign embassies on Friday.

Police sirens could be heard in the area but there was no immediate word on any casualties from the blast.

Bismillah Tabaan, the police commander of the city’s ninth district where the explosion took place, said the cause of the blast was a suicide bombing but details, including the target, were not yet clear.

Interior ministry spokesman Najib Danish said the cause of the explosion was a car bomb in the Qabl Bai area of the city. At least four civilians had been wounded, he said.

The attack came two days after President Ashraf Ghani offered to start peace talks with the Taliban and just over a month after an explosives-packed ambulance was detonated in the city center, killing around 100 people.

.@statedeptspox: We congratulate #Afghanistan's Government on the success of the #KabulProcess Conference. The meeting represented a historic step forward in demonstrating the resolve of the Afghan people to commit a peace process that brings an end to the war with the Taliban. pic.twitter.com/myKcLfLmfu

There was no immediate claim of responsibility for the latest blast.

Much of the center of Kabul is already a zone of concrete blast walls, razor wire and police checkpoints but security has been tightened even further in the wake of the Jan. 27 ambulance attack and another attack on the city’s Intercontinental Hotel earlier in the month.