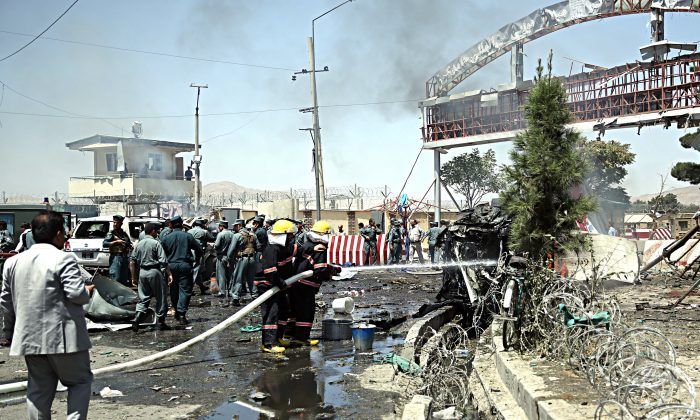 The Kabul provincial police chief, Abdul Rahman Rahimi, told The Associated Press that a car packed with explosives blew up at the busy intersection. He also confirmed the latest casualty figures.

A huge plume of black smoke rose above the city after the midday blast, as police, soldiers and ambulances rushed to the site, which is usually thronging with pedestrians and vehicles.

Taliban spokesman Zabihullah Mujahid said on Twitter that the militant group was behind the attack. He said it was aimed at “foreigners.”

The charred remains of a car lay on its side near the roundabout. Nearby shops were destroyed and the windows of a wedding hall were shattered, witnesses said.

The entrance to the airport is often clogged with traffic, as vehicles must stop at a number of checkpoints.

Kabul has been rocked by a series of attacks in recent days that have killed scores of people and wounded hundreds.

The latest violence comes after the Afghan intelligence service said the Taliban’s longtime leader Mullah Mohammad Omar had been dead for more than two years. The disclosure of his death, later confirmed by the Taliban, triggered an internal succession dispute and raised questions about the future direction of the insurgency.

President Ashraf Ghani was due to hold a televised press conference later Monday.