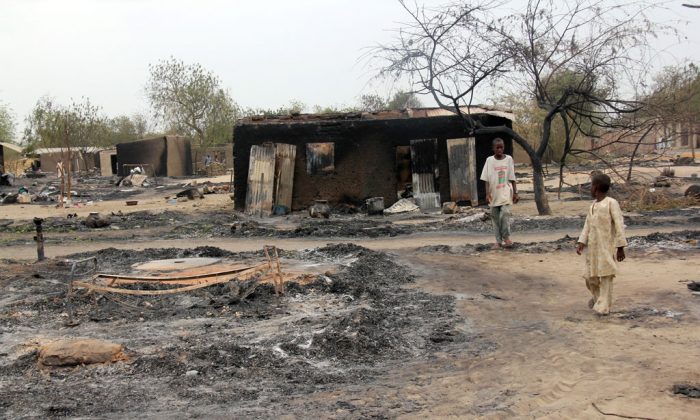 Children walk outside a charrred house in the remote northeast town of Baga on April 21, 2013, after two days of clashes between officers of the Joint Task Force and members of the Islamist sect Boko Haram on April 19 in the town near Lake Chad, 200 kms north of Maiduguri, in Borno State, Nigeria. (AFP/Getty Images)
Africa

N’DJAMENA, Chad—Two groups of suicide bombers targeted a busy market and a refugee camp in Chad on Saturday, killing at least 38 people and wounding 51 in what appeared to be coordinated attacks, officials said.

A group of female suicide bombers hit the market in Baga Sola when it was at its busiest Saturday, killing at least 16 people, said director general of Chad’s gendarmerie, Gen. Banyaman Cossingar. A second group of suicide bombers killed at least 22 people at the nearby refugee camp, he said.

For months, Baga Sola has been home to thousands of people who already had fled deadly Boko Haram attacks in Nigeria. The village is in the Lake Chad region near the border with Nigeria.

While Boko Haram has attacked Chad’s capital before, Saturday’s bombings appear to be the largest and most elaborate staged yet in the country’s lake region.

The extremists have stepped up attacks in Nigeria and neighboring countries including Niger, Cameroon and Chad since Nigeria’s President Muhammadu Buhari took office in May pledging to halt the 6-year-old uprising that Amnesty International says has killed 20,000 people.