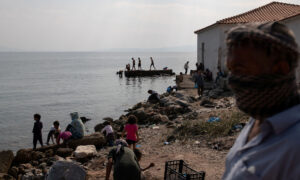 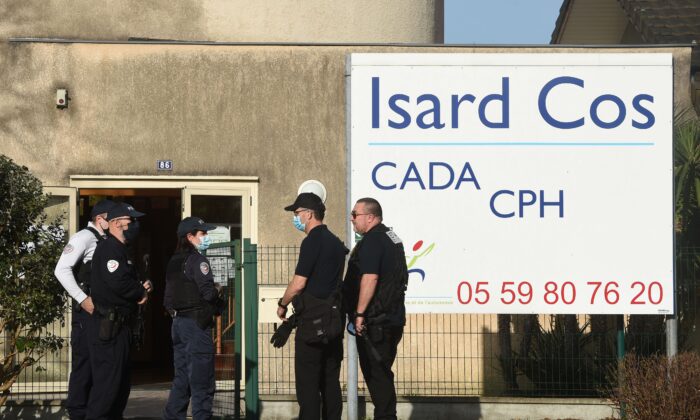 Police officers stand at the entrance of the Isard COS Reception Center for Asylum Seekers (CADA) in Pau, where a manager has been stabbed to death by an asylum seeker in Pau, southwestern france, on Feb. 19, 2021. The victim, a 46-year-old father, was stabbed to death by a Sudanese man whose asylum application had just been refused, according to French police. (Gaizka Iroz/AFP via Getty Images)
Europe

PARIS—A Sudanese asylum seeker stabbed and killed an employee at a migrant center in the southern French city of Pau on Friday after his request for political asylum was rejected, authorities said.

The killer had no terrorist motives, the Pau prosecutor said on Saturday.

Prosecutor Cecile Gensac said that the assailant was not on a national list of terrorism suspects. Following Friday’s attack he was detained by staff at the asylum center.

“Two employees of the center intervened, with a lot of courage. They held him by the arms and locked him in an office. He put up no resistance,” she told a news conference.

She said the 38-year-old assailant had arrived in France in 2015 and had spent some time at the immigration center.

Following two convictions and jail time for acts of violence in 2017-2019, he had lost the right to apply for asylum and was set to be deported to his home country, but he had not responded to a request to report to immigration authorities, she said.

She added that he had come to the center several times in recent days to try and get documents that might extend his stay in France and that he held a grudge against staff at the center.

The victim was the head of the asylum service at the center, who died there an hour after being stabbed repeatedly in the throat, the prosecutor said.

“This is a terrible drama, all the more so because the victim spent his entire professional life helping migrants and asylum seekers,” Pau mayor Francois Bayrou said on France Bleu radio on Friday.

“The man’s asylum request had been rejected, and for good reasons. He then turned against the head of the service, this is extreme and absurd violence,” said Bayrou.

The attack led to new calls for a tougher stance on immigration.

“After all we have suffered, why was a Sudanese migrant still on our territory after he had been condemned and imprisoned for what seemed to be armed violence,” Rassemblement National vice president Johan Bardella wrote on his Twitter feed.