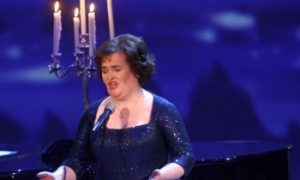 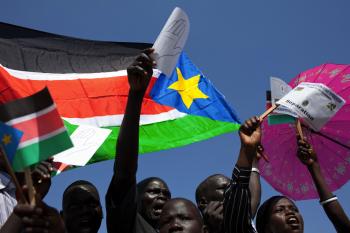 Sudanese supporters of secession wave regional flags and pro-separation placards upon the arrival of Sudan's President Omar al-Bashir at Juba airport on Jan. 4. Bashir told them in a speech in the southern capital that he would celebrate the result of thi (Yasuyoshi Chiba/AFP/Getty Images)
Africa

Sudan Resigned to Separation, but Hopes for Peace (Video)

Days before the start of Southern Sudan nation-making referendum on self-determination, Africa’s largest country is already preparing to split into two sovereign states. While a lack of unity is often viewed as a weakness, in Sudan it seems to be the sole hope for lasting peace, for both the north and south.

Sudan suffered 22 years of civil war caused by cultural, religious, and social differences. It ended in 2005 with the signing of a Comprehensive Peace Agreement (CPA) between the major ruling political parties in the country: the National Congress Party in the north and the Sudan People's Liberation Movement in the south. Sunday’s referendum is the last step in fulfilling the agreement.

Voting will take place Jan. 9 to 15 for the 3.9 million registered voters from Southern Sudan, and approximately 200,000 will vote from the north or overseas.

“The aim of the referendum and of the [south’s] secession is exactly for these conflicts to stop. On Jan. 9 people will decide once and for all what they want to do with their own country, what government they want, and by doing so they will put an end to the source of all conflicts,” says Dr. Francis G. Nazario, head of the Liaison Office of the Government of Southern Sudan (GoSS) in Brussels.

According to Nazario, Southern Sudan has wanted independence since the country was established in 1956 because Southerners have always felt excluded by the north.

“Since the beginning, the state of Sudan was defined as Arabic and Islamic, which excluded the whole majority of people in the country who are neither Arabic, nor Islamic.”

People in the south are considered more African, primarily following an Animist indigenous religion or Christianity.

Nazario says that the continued exclusion brought incessant tensions, which started first in the south, and then moved north.

“All those wars were actually an indication that the state, which established Sudan, has failed. A state, which excludes people cannot sustain its whole.”

While the split is widely seen as a symbol of freedom for the south, it is not a guarantee that the conflicts will cease.

“Unfortunately, secession will not mean the end of the struggles. The Darfur war still continues and in Southern Sudan there are still many tensions between different communities. So we will still see flaring of conflicts in Southern Sudan,” says Nico Plooijer, manager of the Africa Program at IKV Pax Christi, a peacekeeping organization based in the Netherlands.

Plooijer who has been observing the situation in Sudan for many years, says the biggest threat of conflict will be along the border between north and the oil-rich south, especially in Abyei, Kordofan, and Darfur.

“Small skirmishes will start and there is a piling up of troops around Abyei and in Kordofan, so they might turn into hotspots. Kordofan is next to Darfur, so if there is an escalation in Kordofan, linking to the people in Darfur, it would be impossible for the south not to be engaged in it.”