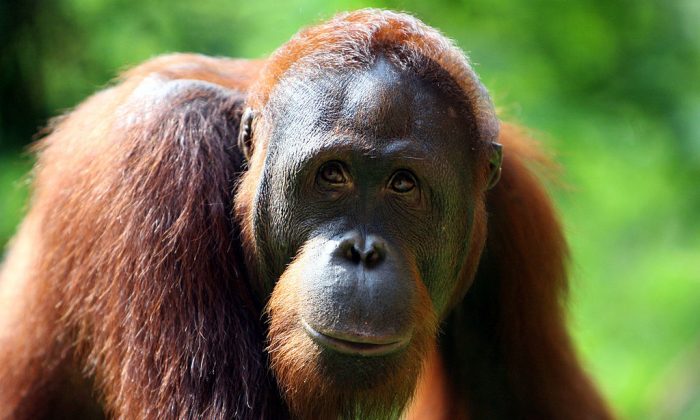 An Orangutan is seen at a zoo in Jakarta, Indonesia. (Photo by Dimas Ardian /Getty Images)
Environment

Viral video footage shows the moment an orangutan seemingly attempts to fight off an excavator in Indonesia.

According to The Independent, the animal is seen lashing out at the machine in the Sungai Putri forest in Borneo, Indonesia, as loggers tore through the area.

WORLD ENVIRONMENT DAYThis dramatic footage shows the devastating impact deforestation is having on precious orangutan habitat. This desperate orangutan is frantically seeking refuge from the destructive power of the bulldozer; a machine that has already decimated everything else around him. Despite all the obstacles thrown at them, our team were able to rescue this orangutan and bring him to safety. Unfortunately, scenes like this are becoming more and more frequent in Indonesia. Deforestation has caused the orangutan population to plummet; habitats are destroyed and orangutans are left to starve and die.We need to ACT NOW. This World Environment Day, plant a tree and help us rebuild and protect precious orangutan habitat. The situation is critical, and we are running out of time. PLANT A TREE TODAY: https://internationalanimalrescue.org/plant-tree?utm_source=Facebook&utm_medium=social&utm_campaign=World_Environment_Day_2018&utm_content=videoPlease share this post far and wide. Thank you.

The footage was filmed in 2013 but was released this year by International Animal Rescue. The video has gone viral again this week.

“This desperate orangutan is frantically seeking refuge from the destructive power of the bulldozer; a machine that has already decimated everything else around him,” according to the group.

The charity said it was able to rescue the orangutan, which means “man of the forest” in the Malay language. “Despite all the obstacles thrown at them, our team were able to rescue this orangutan and bring him to safety,” the group said.

“Unfortunately, scenes like this are becoming more and more frequent in Indonesia. Deforestation has caused the orangutan population to plummet; habitats are destroyed and orangutans are left to starve and die,” it said.

The World Wildlife Fund (WWF) says that 100 years ago, there were likely more than 230,000 orangutans in total but the Bornean orangutan population is now estimated at about 104,700, which makes it an endangered species. Meanwhile, there are about 7,500 Sumatran orangutans in the wild, making that species critically endangered.

However, as the Orangutan Project website notes, Bornean and Sumatran orangutans producing viable offspring. Many “Bornean/Sumatran crosses were once present in American zoos,” the site says.

The WWF also noted there is a third species of orangutan that was announced in November 2017. But “with no more than 800 individuals in existence, the Tapanuli orangutan is the most endangered of all great apes,” the group says.

The Orangutan Foundation’s website says that the large expansion of palm oil plantations is a reason why the populations are in decline.

“Palm oil is the most widely used vegetable oil in the world, having even surpassed soya in terms of usage. Surging global demand for palm oil has fueled massive forest destruction throughout Indonesia and Malaysia, countries that together account for 85% of the world’s palm oil production,” the website says.

“Half the packaged food (and other) products found on supermarket shelves now contain palm oil. Palm oil and palm kernel oil are found in all manner of baked goods, such as cookies, bread, and potato chips, as well as in chocolate and milk (where it adds Vitamin A),” the group says.

“Palm oil has also replaced coconut as the main cooking oil traditionally used in Indonesia as well as replacing peanut oil in Myanmar. Palm oil is also extensively used in cosmetics and toiletries where it adds creaminess and/or foam to the product. Palm oil is an important ingredient in the manufacturing of soaps, shampoos, detergents, and toothpaste. Increasingly, palm oil is used as a biofuel,” the website adds.

“Another study by Princeton and a Swiss institution reported that between 1990 and 2005, up to 60% of palm oil expansion occurred at the expense of primary tropical rain forest,” it says.

Orangutans, which can live as long as 60 years, are also threatened by poachers, according to The Orangutan Project.

“Poaching orangutan infants and hunting for meat also threatens the species. Mothers are often killed for their babies, which are then sold on the black market for pets as they are cute. Babies cling to their mothers and suckle their mother’s milk until the age of 6 years. Rescued infants are then rehabilitated by volunteers at orangutan rescue centers,” the website says.