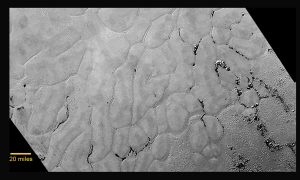 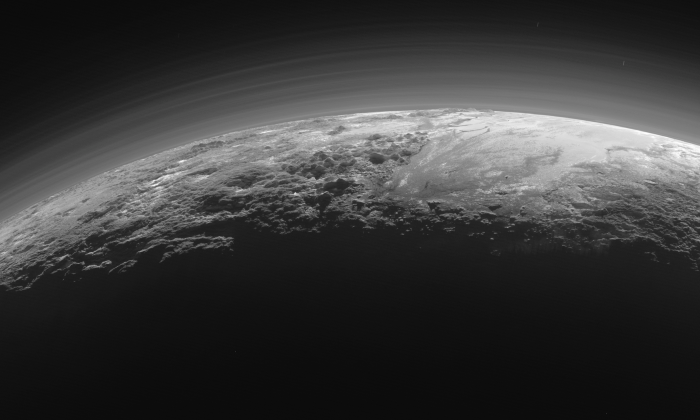 The best shot yet. (NASA/JHUAPL/SwRI)
Science

The more we find out about Pluto, the more perplexing it seems. For several weeks after its July 14 fly-by, NASA’s probe New Horizons was too busy doing science to transmit data to Earth. During that time we had to content ourselves with the few “taster” images that were beamed back immediately after it passed Pluto.

However the probe has now begun the year-long process of transmitting its vast haul of fly-by data, including images that are crisper and more reliable because they preserve original details that we couldn’t see in the compressed versions. A selection of new images is released every Thursday—with the latest revealing Pluto’s haze layers in stunning detail.

The picture above is my favourite. It was captured just 15 minutes after closest approach, looking back sunwards across part of the southern edge of the bright area informally known as Tombaugh Regio.

The water-ice mountains adjoining and projecting up through it are wonderfully shadowed, and look at the incredibly complex haze layers that you can see above the distant horizon. These are probably a product of the solar ultraviolet light stripping hydrogen from molecules of methane, which then link together to form long chains of tar-like substances called tholins. These form tiny particles, and those that settle to the ground help to give it a reddish stain, but why there are so many layers in the atmosphere, we don’t know.

Below is a spectacular simulated view (compiled from several individual images) showing the Tombaugh Regio area to the north and the dark, heavily-cratered terrain to its south. These craters are prominent because of their bright rims, which could be nitrogen frost. What catches my attention in particular on this image are the curved and branching fractures that sweep across the terrain in the lower left and slice through several of the smaller craters, providing evidence of an episode of geological activity, maybe even within the past billion years.

You can see the northern ends of a couple of these fractures in the lower left of the next image. More importantly, it shows a relationship between Pluto’s dominant landscape-forming material (water-ice) and the more volatile ices (such as frozen nitrogen, methane and carbon monoxide) that make up the pale terrain of Tombaugh Regio. At the very low temperatures on Pluto’s surface (-225°) water-ice is as strong as rock on Earth.

The landscape in the left third of this image is composed of water-ice. The very flat terrain in the right third, which is part of Tombaugh Regio, is weaker and cannot be frozen water. You can see it divided into slabs or cells. Some on the New Horizons team have suggested it might be traces of convection currents driven by heat from Pluto’s interior.

There’s a rugged mountain peak of water-ice, more than a kilometre high, piercing the exotic ice in the lower right. The middle third of this image reveals for the first time that all the water-ice around this edge of Tombaugh Regio has been disrupted into a jumble of giant, jagged blocks, of which that mountain is just a large example. As yet we have no idea how this happened, but it suggests that each cell in the interior of Tombaugh Regio might be sitting over its own block of disrupted water-ice.

The next image is from a little further south-east around the edge of Tombaugh Regio. Here the water-ice terrain has been stained very dark, perhaps by particles of tar settling out from the nitrogen atmosphere. There’s a similar pattern of giant jumbled blocks, but there’s a new twist here. If you look carefully you can make out fine patterns of lines, in both the dark terrain and in some of the bright terrain.

One suggestion from the New Horizons team is that these are dunes composed of wind-blown ice grains, preserved from a time when Pluto’s atmosphere was denser. The present atmosphere is mostly nitrogen with a little carbon monoxide and methane, and there are signs that it is currently freezing out onto the surface as Pluto’s eccentric orbit carries it further from the sun. I’m sceptical about the dunes, and wonder if instead the pattern records ablation of ice-like penitentes on Earth—when snow formations at high altitudes are removed by melting or evaporation.

Next a view covering the northern edge of Tombaugh Regio. At the upper left, note the glacier-like flow of the weak exotic ice into the rugged water-ice terrain. The part of Tombaugh Regio on the right cannot be floored by weak ice; it is rugged terrain, no different to that seen elsewhere except that its surface is especially bright. This is probably nitrogen snow covering water-ice terrain, and there are signs that nitrogen-ice flows glacier-like from the bright rigged terrain into the flat area. Why here? How recent? We don’t know.

This next image, like the top one was taken just 15 minutes after the closest approach to Pluto. The mountains on the left are up to 3,500 meters high. The layers of haze in Pluto’s atmosphere are also visible.

And finally, Pluto’s large moon Charon. It’s not been getting much attention, but for me it too is a fascinating world. New Horizons found no trace of an atmosphere and the surface is mostly water-ice but it boasts the only dark polar cap in the solar system. Did tar particles from Pluto’s atmosphere somehow make it across to Charon?

Elsewhere there are plenty of impact craters, though probably fewer than on Pluto’s water-ice terrains, which poses a problem of why and how Charon has been resurfaced more recently than much of Pluto. Maybe there is some twist to the tidal-heating interaction between Pluto and Charon that we have yet to fathom. Charon also boasts a globe-spanning system of kilometres-deep fractures, grander than anything seen on Pluto so far.

While the images tell us a lot about Pluto and Charon, they also raise a number of new questions. We simply don’t know what controls the localized nitrogen snowfall, the intricate haze layers or the old fractures that cut through the craters. We don’t know why Pluto’s surface is so diverse or its atmosphere so complex, or how much of this is driven by tidal interactions between Pluto and Charon. The list goes on. Scientists will be using New Horizons data to try to answer these questions for decades to come.