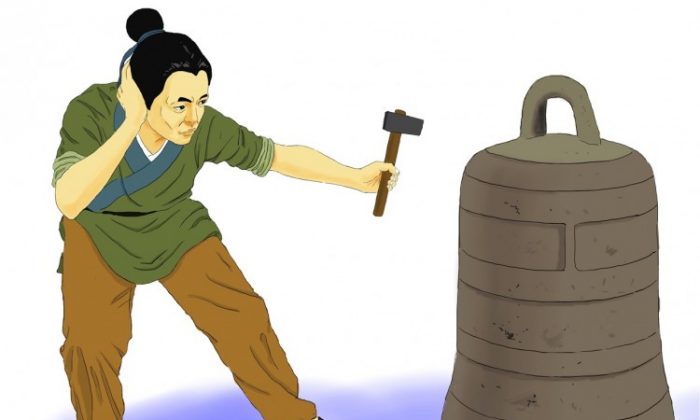 Stuffing the Ear When Stealing a Bell

In a story from the Spring and Autumn period (770–221 B.C.), a thief broke into a rich family’s house in order to steal a big bell. He tried to carry it away on his back. However, the bell was too bulky and heavy to carry.

The thief then found a hammer and intended to break it into a few pieces, so that it would be easier for him to carry.

On his first hit, the bell made a loud noise. Hearing the sound, the thief was very scared and he stuffed his ear hoping the sound would become quieter so that no one would hear. He was also afraid the neighbors would discover he was stealing. After hesitating for a bit, he decided to continue.

While hitting the bell with the hammer, he plugged his own ear. Nevertheless, the sound from the bell was audible to others.

It was a stupid action to stuff one’s own ear when stealing the bell. This idiom is used to refer to those who think they are clever enough to cheat others or who do wrong things with the hope that no one will know. When cheating others, one cheats oneself, or engages in self-deception.