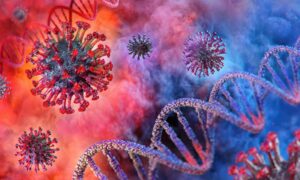 A new UK study has raised concerns that the CCP virus has more chance to mutate during chronic infections, and it could “mutate to outwit our vaccines,” a leader of the study said.

In an unedited manuscript pre-published by Nature on Friday, a team led by researchers at Cambridge University said they saw repeated mutations while treating an immunocompromised patient.

The team sequenced virus genomes in a patient 23 times across 101 days while he was treated for COVID-19, the disease caused by the CCP (Chinese Communist Party) virus, commonly known as the novel coronavirus.

The patient, who has now died, was a man in his 70s with a “seriously compromised” immune system.

After the patient was given two doses of convalescent sera—plasma from the blood of recovered COVID-19 patients that contains antibodies—the team saw a “dramatic shift” in the virus population.

According to a Cambridge University news release, one of the variants that emerged, which became dominant for a while, contained two mutations of concern.

One is the D796H mutation, which seemed to be responsible for decreasing susceptibility to the antibodies in the plasma—a typical viral mutation to escape immune pressure.

The other is ΔH69/ΔV70 amino acid deletion in part of the spike protein—a mutation that makes the virus twice as infectious.

“This paradigm is classic for viruses, whereby escape mutations are followed by or accompanied by compensatory mutations,” the university wrote.

The ΔH69/ΔV70 deletion had been detected multiple times, including in the so-called UK variant VUI 202012/01 and in the cluster-5 variant found both in minks and humans in Denmark. But this is the first time researchers have observed its emergence in a patient.

The team found that although the dominant variant “initially appeared to die away, it reemerged again when the third course of remdesivir and convalescent plasma therapy were administered.”

Ravi Gupta, a Cambridge professor who led the research, said, “What we were seeing was essentially a competition between different variants of the virus, and we think it was driven by the convalescent plasma therapy.”

He said the findings raise a “worrying possibility.”

“Given that both vaccines and therapeutics are aimed at the spike protein, which we saw mutate in our patient, our study raises the worrying possibility that the virus could mutate to outwit our vaccines.”

“This effect is unlikely to occur in patients with functioning immune systems, where viral diversity is likely to be lower due to better immune control. But it highlights the care we need to take when treating immunocompromised patients, where prolonged viral replication can occur, giving greater opportunity for the virus to mutate,” Gupta added.

Dr. Julian Tang, a virologist from University of Leicester, said that a similar phenomenon has been observed before in a 45-year-old immunocompromised patient who received different treatment.