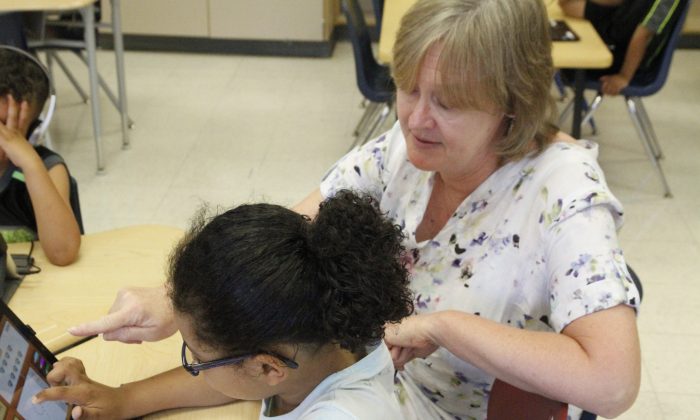 MIDDLETOWN—A study of students in a two-year kindergarten program in the Middletown Enlarged City School District shows the advantages of two years of kindergarten for children who might have otherwise fallen behind.

When district Superintendent Dr. Kenneth Eastwood arrived in 2004, only 54 percent of students were graduating and low morale was rampant, he said.

Teachers and administrators observed that dropping out and behavioral problems at higher grades could be traced to the primary grades, even kindergarten.

Behavioral problems started to show up in the fifth, sixth, and seventh grades, and it was often because they couldn’t learn the material, Eastwood said. They would see “constant red marks on papers” and it was demotivating, he said.

These students who were having problems were not ready for the next grade because they hadn’t mastered the skills and knowledge of the grade they were in. “They are being told by this environment that they have no value because they are not successful,” Eastwood said. “We trace all this back to kindergarten.”

Instead of moving children to the next grade through social promotion, a practice of advancing a student based on their age rather than their mastery of a grade, he and his team, supported by the school board, decided students could move up only when they learned the skills at that grade, and it had to start with kindergarten, he said.

Many of the kids that begin their education with us do not come having read classics like “Goodnight Moon” every night or come to kindergarten not knowing what a Crayola is.
— Dr. Kenneth Eastwood, Superintendent,Enlarged City School District of Middletown

“Many of the kids that begin their education with us do not come having read classics like ‘Goodnight Moon’ every night, or … knowing what a Crayola is,” Eastwood said.

That’s not because they are poor students, but because their needs for learning were not being met, Eastwood said. The school district decided to personalize learning for each student, and “one such personalized approach is our two-year kindergarten program,” he said.

The program is two full years including the summer months before they go into first grade, and targets students who were identified as less likely to succeed in the early years of schooling.

The first two-year kindergarten (2YK) group of 55 to 65 students is now entering third grade.The school district recently analyzed the performance of this group compared with children who were ready to enter first grade after one year of kindergarten.

At the end of two full years of kindergarten, the study revealed 2YK students out-performed other children in both reading and math.

The 2YK students started out with academic scores below other children. At the end of two full years of kindergarten, and again at the end of their first grade, the study revealed they out-performed other children in both reading and math.

“They are between the average child and what we would refer to as our mastery students, those that are mastering skills in big ways,” Eastwood said.

And Eastwood expects this trend to continue.

“When kids are successful in kindergarten, first, and second grades, they have a tendency to be successful through the [higher] grades,” he said.

This coming academic year, the program will see its fourth cohort. A cohort is education jargon for students going through the school system together, which may or may not be a grade level or class, according to the Glossary of Educational Reform.