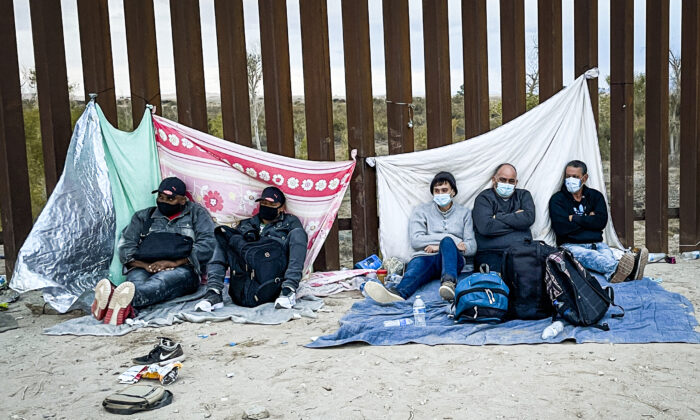 Illegal immigrants wait for Border Patrol by the border fence after crossing the U.S.–Mexico border in Yuma, Arizona, on Dec. 9, 2021. (Charlotte Cuthbertson/The Epoch Times)
US

All across the country, city and county governments are creating programs that provide free legal representation at taxpayer expense to illegal aliens contesting deportation orders, according to a new report by the Immigration Reform Law Institute (IRLI).

“These programs are an insult to every law-abiding American citizen and legal resident,” Dale L. Wilcox, executive director and general counsel of IRLI, said in a statement.

“Our laws clearly state that non-citizens charged with civil offenses do not have a right to legal representation. Yet we have radical anti-borders groups starting these programs and sticking unknowing citizens with the bill. It’s outrageous.”

Founded in 1986, IRLI is a public interest law firm that describes itself as being “dedicated to achieving responsible immigration policies that serve our national interest.”

According to IRLI, a “deportation defense program” is any initiative that “provides representation and/or other legal services to a non-citizen facing deportation proceedings, typically at reduced or no cost to the defendant.”

“Under U.S. law, illegal aliens and other non-citizens facing deportation orders do not have a right to legal representation because immigration law is a civil matter, not a criminal one,” the IRLI stated, in a press release.

The Sixth Amendment states that a defendant in criminal proceedings has a right to “the Assistance of Counsel.” In Gideon v. Wainwright (1963), the Supreme Court unanimously ruled that the Fourteenth Amendment to the U.S. Constitution applies the Sixth Amendment to the states, creating a right for defendants in criminal proceedings unable to afford their own lawyers to have the state appoint and pay for attorneys on their behalf.

According to the American Bar Association, there is such a thing as a “civil right to counsel,” but it’s not a widely accepted concept.

Civil right to counsel, which is sometimes called “Civil Gideon,” refers to the idea that “people who are unable to afford lawyers in legal matters involving basic human needs—such as shelter, sustenance, safety, health, and child custody—should have access to a lawyer at no charge,” the ABA states.

“The ‘Gideon’ reference is linked to the famous Supreme Court ruling that individuals charged with serious crimes have a right to counsel. While this right exists in criminal matters, it exists at present only in very limited circumstances in civil matters.”

The left-leaning Vera Institute of Justice, headquartered in Brooklyn, N.Y., favors expanding the right to taxpayer-provided counsel and proposes creating a taxpayer-funded federal defender service to provide legal representation to all people in immigration proceedings who can’t afford a lawyer.

In the meantime, Vera “has served as the main catalyst for the proliferation” of existing deportation defense programs for illegal aliens, IRLI reports.

According to Vera’s website, individuals in deportation proceedings “may hire an attorney, but they are not provided with one if they can’t afford it themselves.”

“Although the Sixth Amendment guarantees counsel for the accused in all criminal prosecutions, those protections do not apply to immigrants facing deportation, which are considered civil proceedings,” the website states.

“Because very few can afford to hire a lawyer, most immigrants face deportation proceedings alone and without any legal defense.”

The IRLI report states that Vera frequently gives one-time grants to local governments that initiate these deportation defense programs in hopes that the programs will become permanent. Its first program started in 2013 in New York City and was known as the New York Immigrant Family Unity Project.

Vera acknowledged that in California, Santa Ana “increased and made permanent funding for its universal representation program,” and Long Beach “committed to leveraging federal sources of stimulus and recovery funding to aid an increase in public funding for the Long Beach Justice Fund.” San Diego launched a new $5 million legal defense program, “the first of its kind in a border county.”

Philadelphia doesn’t describe itself as a “sanctuary city,” preferring to label itself a “Welcoming City,” according to a 2018 statement: “We do not allow our City employees, including police officers, to ask about the documentation status of people they encounter.”

According to IRLI, Philadelphia Mayor Jim Kenney, a Democrat, announced in 2019 the creation of PAIFUP, a collaborative effort between Vera and the city to counter the alleged “hate” emanating from the Trump administration, which was perceived as taking a hard line on immigration issues. City taxpayers kicked in the first $100,000, and Vera and the Samuel S. Fels Fund donated another $200,000.

The program was in jeopardy in 2020 during the pandemic lockdowns that led to mass layoffs and reduced government budgets. Even though Philadelphia was about to zero out the program, city leaders “somehow not only found a way to maintain the program amid a financial crisis, but doubled taxpayer commitment to $200,000 for next fiscal year,” IRLI stated.

PAIFUP said it had “no eligibility criteria other than income and a lack of private counsel” and that it didn’t “exclude individuals based on prior criminal convictions, residency, or any other reason.”

The Epoch Times reached out for comment to the Vera Institute of Justice by telephone and email but didn’t receive a response by press time.