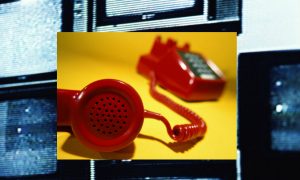 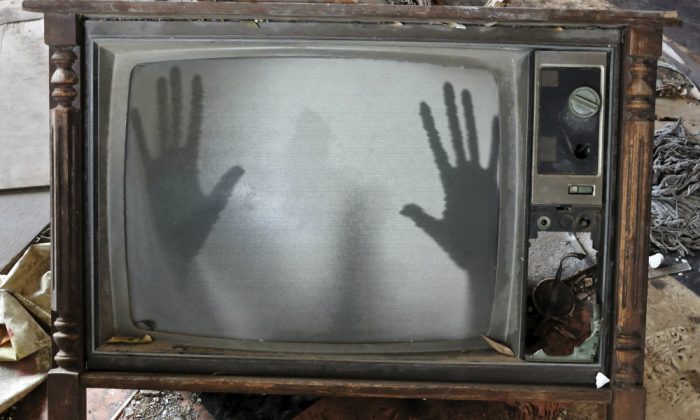 A concept image of a ghost appearing on a flickering television set. Could the dead communicate through electronics as some have claimed? Dr. Imants Barušs investigates. (Thinkstock)
Beyond Science

Dr. Imants Barušs at the University of Western Ontario in London, Canada, has conducted two studies attempting to verify reports that deceased persons have communicated to the living through electronic devices.

In the first study, he was able to reproduce this phenomenon in a weak sense, he said, but not a strong one. This study was published in the Journal of Scientific Exploration in 2001 and detailed in the Epoch Times article “Fascinating Study of Purported ‘Phone Calls From the Dead’ Phenomena: Some Confirmation.” He and his team recorded the static between radio stations under controlled circumstances and while talking to any spirits that may be around; they heard what could be construed as some words or phrases in the recordings. His results hinted that the so-called “electronic voice phenomenon” (EVP) may exist, but the results were not sufficiently anomalous to be considered a replication in a strong sense.

His second study, published in 2007, attempted to address some weaknesses of the first. Instead of using the static between stations, which was more open to interpretation by the listener, he used computer programs that would randomly generate letters and whole words to see if anomalous phrases would appear.

If the researchers saw a pattern or bias that deviated too far from what could be expected to appear by chance, it could indicate that a spirit was influencing the machine to convey a message.

He simultaneously used an EVPmaker, a device that chops sound files and reassembles them randomly. The idea was to see if there was any overlap between the random word generator and the EVPmaker that could make a stronger case for spirits trying to communicate a particular message.

The results were mixed, with at least one significant string of words appearing, but not a wealth of anomalous signals. The most significant result was found in the use of another computer program, one that randomly generated either the word “yes” or the word “no.” The researchers asked 11 verifiable yes-no questions, nine of which were answered correctly by the random generator.

The two questions it answered incorrectly were slightly open to interpretation. It answered incorrectly the question, “Do we live in London?” It said “no,” when the team did live in London, Ontario, Canada.  Barušs noted, however, that the question could be misconstrued to refer to the more famous London, England. It was also asked whether one of the research assistants had five “kids.” It answered “yes.” In fact, the assistant had three children and two dogs. Barušs noted that, if a being were influencing the random yes/no generator, it may have considered the dogs somehow among the “kids.”

Either way, the result of 9 correct answers out of 11 questions was considered by Barušs to be a “statistically rare event.” The program had a 4.2 percent chance of obtaining this result.

ITC (instrumental transcommunication) refers to the random yes/no response generator. It may be noted that the provincial election referred to in the questions was expected to be called on the Wednesday mentioned, but it was actually called on the preceding Tuesday, so the ITC was correct in answering “no.”

Much of the recording and the output by the random generators did not otherwise show a strong indication that spirits may have been trying to communicate. Barušs did, however, highlight a few other events of interest.

A woman who is considered to be a medium was used in the experiment. The idea was that she might be able to detect any spirits trying to communicate through the devices, and she might thus give the researchers advice on how to tweak the experiments for success.

During one of the sessions, the researchers posed the question, “What do we need to know that we don’t understand about this?” The medium immediately heard the EVPmaker produce the word “opportunity.” The random word generator had been activated at the exact same time and produced the phrase “on sharp opportunity are was yes name.” Barušs and another research assistant present did not hear the word “opportunity” immediately, but they did hear it upon playing back the tape.

During another session, the researchers posed the question, “What would you have us do to make this work better?” The answer produced by the random phrase generator was “We ITC dimension fortunate when irreparable continue.” Baruss and the team wondered whether the word “continue” indicated that they should continue. They activated the word generator again, producing the phrase, “Feel acquire light figure logical people continue.” The word “continue” was repeated.

The random letter generator did not produce any results Barušs felt worth highlighting.

The medium said she understood it to be an arduous feat for the dead to impact electronic devices and that few would make the attempt. She said she received some messages from deceased researchers, including Barušs’s late colleague who “discoursed about quantum theoretic mind/matter interactions in what appeared to be much the same style as when he had been alive,” Barušs wrote. Barušs and the medium tried meditating before the tests, as suggested by a spirit via the medium.

“As we experimented with such speculative strategies, the medium and I felt that we entered a zone of uncertainty that was contrary to the clarity required of scientific research,” Barušs wrote. “However, we thought that such uncertainty may be necessary, at least for a while, if these phenomena were to be given a chance to develop so as to be able to manifest in a measurable form.”

He continued: “For instance, during the eleventh session, we decided not to test the yes/no generator since that would take us outside the realm of ambiguity. It was not until the 25th and last session that we deliberately evaluated the output from the yes/no generator with a series of questions to which we could know the answers.”

This is why they had not conducted more of the solid yes/no verifiable line of questioning that produced the strongest results.

Barušs also noted that the computer programs may have been insufficiently random in their word generation. This may have inhibited any beings trying to influence the programs. Another possibility that must be considered, he said, is that the minds of the researchers may have influenced the devices. Testing at the Princeton Engineering Anomalies Research Lab (PEAR) at Princeton University has shown the mind may physically affect electronic devices.

Listen to Tara MacIsaac discuss this phenomenon on Coast to Coast AM between 1 a.m. and 2 a.m. EST Sunday, Aug. 10, 2014. Find a local station to listen to the broadcast or find out how to listen online by visiting the Coast to Coast website.