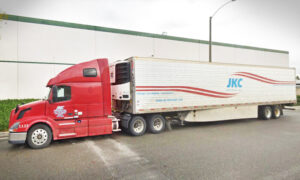 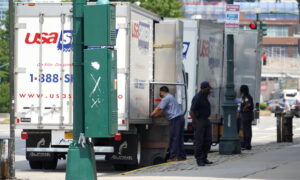 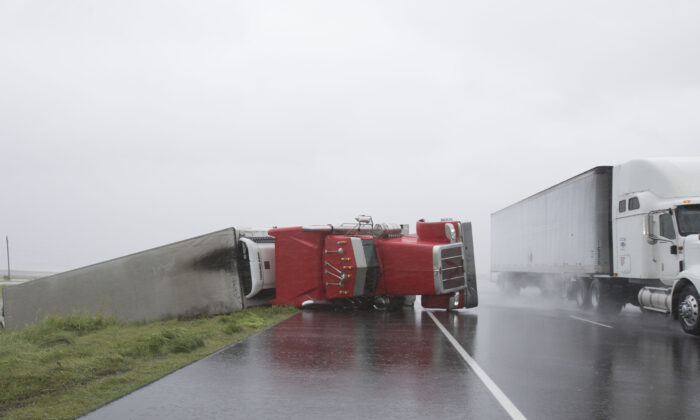 A big rig lies on it's side on Hwy 59 near Edna, Texas, south of Houston, in the aftermath of Hurricane Harvey on Aug. 26, 2017. (Daniel Kramer/AFP via Getty Images)
US News

DETROIT — Safety features such as automatic emergency braking and forward-collision warnings might prevent more than 40 percent of crashes in which semi-trucks rear-end other vehicles, a new study has found.

The Insurance Institute for Highway Safety, a research group supported by auto insurers, also found that when the rear crashes happened, the systems cut the speeds by over 50 percent, reducing damage and injuries.

The institute called on the federal government to require the systems on new large trucks and said many truck fleet operators are already adding emergency braking on their own.

“Rear-end crashes with trucks and other vehicles happen a lot, often with horrible consequences,” said Eric Teoh, the institute’s director of statistical services who did the study. “This is an important countermeasure to that.”

To reach his conclusions, Teoh examined crash data per vehicle mile traveled at 62 trucking companies that use tractor-trailers or other trucks weighing at least 33,000 pounds (15,000 kilograms). The study found about 2,000 crashes that happened over more than 2 billion miles (3.2 billion kilometers) traveled from 2017 through 2019.

The study compared trucks from the same companies that were equipped with collision warning alone, automatic emergency braking, and no crash prevention features at all, the IIHS said.

The IIHS also found that trucks equipped with a collision warning system had 22 percent fewer crashes than those without either technology. For automatic emergency braking, the figure was 12 percent.

“This is important information for trucking companies and drivers who are weighing the costs and benefits of these options on their next vehicles,” Teoh said.

The institute says U.S. crashes involving large trucks rose by nearly one-third since falling to a record low in 2009. A total of 4,136 people died in such crashes in 2018, with 119 of the deaths in rear-end crashes.

Two federal agencies that regulate heavy trucks, the Federal Motor Carrier Safety Administration and the National Highway Traffic Safety Administration, said they will review the IIHS report. NHTSA said in a statement that it’s nearly finished with a study examining the safety benefits of driver-assist technology on heavy vehicles, while the motor carrier administration has been encouraging voluntary use of systems such as automatic emergency braking.

In October of 2015, NHTSA began the regulatory process to evaluate forward collision warning and automatic braking for heavy trucks.

The Owner-Operator Independent Drivers Association, which represents independent truckers, said it can’t accept the study’s conclusions because it didn’t include real-world factors such as driver training and experience or a carrier’s safety record.

AAA and other groups that have studied automatic emergency braking and other driver-assist features have found that they don’t work properly all of the time. But Teoh said his study still found that they prevent or mitigate the severity of crashes, and their performance is improving.

The systems use cameras, radar, or other sensors to check the roadway. Some just warn the driver of hazards, while more sophisticated emergency braking systems will actually brake the truck.

In the U.S., there are no requirements for either system, but automatic emergency braking with forwarding collision warning has been required by the European Union on all new large trucks since late 2013, the institute said.

The systems could prevent horrific crashes that happen when trucks don’t stop for slower or stopped traffic in freeway construction zones, Teoh said.

A crash with those circumstances happened in July 2019 in Indianapolis, killing a woman and her 18-month-old twin daughters. Prosecutors alleged that a semi driver was traveling 65 mph (105 kph) when his rig hit a line of traffic in a construction zone. Authorities charged the driver with reckless homicide and said he didn’t start braking until the rig slammed into the first of several vehicles. Five other vehicles were hit and seven more people were injured.