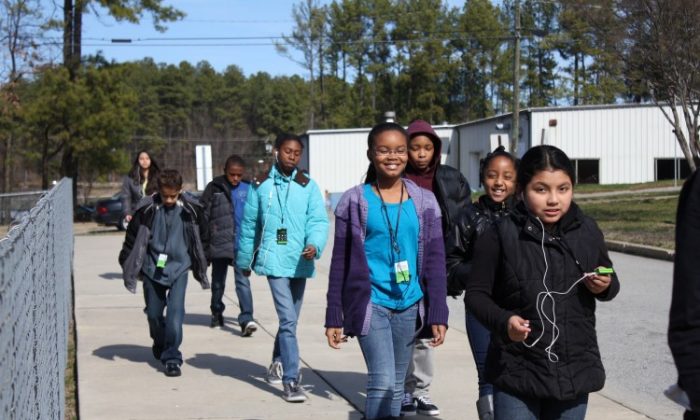 Laura Fenn was a fifth-grade teacher for over 15 years before she created The Walking Classroom. (Laura Fenn)
US

Students Take a Walk With ‘The Walking Classroom’

When Laura Fenn, fifth-grade school teacher and founder of The Walking Classroom, saw her students sitting in a classroom, parked behind a desk and unfocused on their schoolwork, she knew something had to be done.

The Walking Classroom is a nationwide program Fenn developed in response to the lack of opportunities students have during the school day for activity.

Fenn, concerned for her students and their lack of physical activity, led her students outside and gave them each a podcast.

“I loaded up some classroom sets for my students—educational podcasts, which I found on the Internet,” she said.

The rates of childhood obesity are growing larger by the day. According to the Centers for Disease Control and Prevention (CDC), childhood obesity has more than doubled in children and tripled in adolescents in the past 30 years.

“The percentage of children aged 6–11 years in the United States who were obese increased from 7% in 1980 to nearly 18% in 2010,” according to the CDC website’s “Childhood Obesity Facts.”

More than one-third of children in the United States were overweight in 2010, according to the CDC.

Fenn has taught at public schools in East Harlem, N.Y., and Chapel Hill, N.C., and she realized that in both cities, students were spending too much time inside.

“Kids were being inside more and more,” she said. “There are cuts to recess and budgets.”

Her students walked around the school and listened to lessons on the podcasts that she bought. The idea was to have her students spend more time outside while not jeopardizing instructional time.

Teachers’ and administrations’ desire for students to do better on their tests has been contributing to obesity, according to Fenn, and children have been getting bigger as they spend more and more time inside at their desk.

She said that her students really took to the podcasts. Fenn noticed that the boys and girls who once had trouble focusing really improved after they took the walk outside.

“The goal was to get these kids some fresh air and exercise—really, they need it—they’re kids,” she said.

The impact on the students’ learning after they returned from the educational podcast walk was a beautiful surprise, she said.

“They are in a better mood, better behaved, and more focused,” she said, adding that it is also a nice way to ensure that all children are getting physical activity.