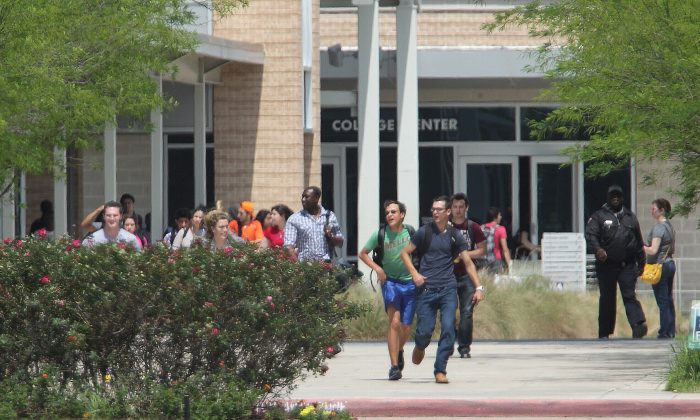 Students run from the Lone Star College's Cypress-Fairbanks campus Tuesday, April 9, 2013, in Cypress, Texas. At least 14 people were hurt in a stabbing at the campus. (AP Photo/Houston Chronicle, James Nielsen)
US

CYPRESS, Texas — Dylan Quick was a shy young man who took out the trash and gardened with his parents, neighbors thought. That image was shattered Tuesday when police accused the 20-year-old of going on a rampage with a knife at a suburban Houston community college and said he later told them he had fantasized for years about stabbing people to death.

The Harris County Sheriff’s Office said that about 11:20 a.m. Quick began a building-to-building rampage with a razor-like knife at the Lone Star Community College System in Cypress. He wounded at least 14 people, two critically.

“I can’t imagine what would have happened to that young man to make him do something like this. He is very normal,” said Magdalena Lopez, 48, who has lived across the street from the Quick family for 15 years.

Quick would say hello when he took out the trash. Sometimes, he would work in the yard with his family. Neighbors, though, did note that he rarely came out alone.

Still, the Quicks were friendly and fit in well with the other families on the block of brick, ranch-style homes. Most were aware that Quick is deaf. A street sign, “Deaf Child In Area,” was posted on the block to warn drivers.

“I can’t believe he would do it,” Lopez added.

But hours after the stabbing attack, Quick was charged with three counts of aggravated assault, and the statement from the sheriff’s office said pieces of the blade used in the attack were found in at least one victim and at the scene of the attack. A knife handle was found in a backpack Quick was carrying when he was arrested. Authorities were seen leaving Quick’s parents’ home with two brown paper bags.

No one answered the door or the phone at the red brick home, though two vehicles were parked in the driveway, one of them a Honda Accord with a license plate that read “DYLAN.” It was not immediately known if Quick has an attorney.

The attack began before noon on a sunny spring day, interrupting the careless chatter of Diante Cotton and his friends, who were sitting in the cafeteria when a girl clutching her neck walked in, yelling.

Walking outside, Cotton and his friends saw another half-dozen people with injuries to their faces and necks. Some were being loaded into ambulances. The most critically injured were evacuated in medical helicopters.

“I turned around, and there was just blood — just blood dripping down the stairs, all over the floor, all over everyone’s towels, on their necks, just a lot of blood,” Melody Vinton told KHOU-TV.

The attacker ran past Vinton, she said, as she was leaving her chemistry class. He was stabbing people, she said, one after another, always aiming for the neck or face.

“There’s no humanity in that. Just to see another human being do that was more traumatic than anything,” Vinton said.

Vinton and other students in the science building rushed to help the victims until emergency crews arrived.

Michelle Alvarez tried to back away when she saw Quick running toward students. She didn’t even feel it as he swiped her.

“He came running and swinging at my neck, as I tried to get out of the way,” she told the Houston Chronicle.

It remains unclear how long the attack lasted, but Lone Star college officials said they locked down the campus shortly after 11:30 a.m. Students described phones going off informing them of the lockdown. Some stayed in class until they were dismissed. Others went out to the hallways, where they were evacuated to their cars.

The sheriff’s office said Quick told them he had fantasized about stabbing people to death since elementary school and had planned the attack for some time.

But Michael Lincoln, who lives next door, said Quick had never been aggressive, making the accusations even more shocking.

“If he’s outside, he speaks to me, ‘Hey neighbor, how you doing?'” Lincoln said.

Elva Garcia, 46, who lives two houses down from the Quicks, described him as a nice young man who stayed out of trouble and only came outside with his parents. She saw him, she said, just this past weekend, working with his parents in the front yard.

“We can’t even believe it. What motive would he have?” Garcia said.

The attack came three months after a different Lone Star campus was the site of a shooting in which two people were hurt. The suspected gunman in that incident is charged with aggravated assault.