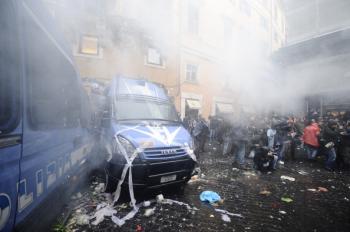 Rubbish thrown by demostrators lies strewn on police cars during a protest against education reform on November 30, 2010 in Rome. Students and academics are outraged at cuts of around nine billion euros (12 billion dollars) and 130,000 jobs in the education system. (Filippo Monteforte/AFP/Getty Images)
Europe

A student protest in Rome on Tuesday against government measures that could lead to privatization of education, escalated into clashes with a heavy police presence.

Last week some protesters succeeded in entering the Upper House of Parliament during one of many protests.

This round, better-prepared police tried to prevent a recurrence of the breach and used armored cars, tear gas, and baton charges. Pierlugi Bersani of the largest opposition party, called the “militarization” of Rome a disproportionate response by the government that increased tensions.

The Lower House of Parliament was scheduled to vote on the proposed reforms on Tuesday.

Students claim the links between schools, universities, and businesses will decrease research in higher education and lead to privatization.