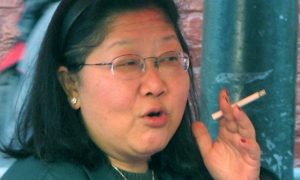 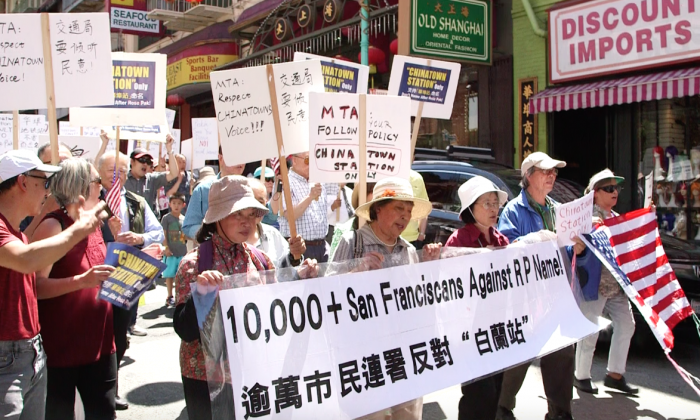 Over 100 people holding signs, at times shouting, “no Rose Pak”, “Just Chinatown Station” were in San Francisco Chinatown on Wednesday, August 14, to protest naming the Chinatown subway station after the late Rose Pak. They walked from Grant Avenue along Jackson St. and Stockton Street, then congregated in front of The Chinese Club for a spirited rally.

At the rally, Steve Ball from the Six Companies said: “Let’s stick together. Don’t let the politicians and City Hall tell us what to do. We want to tell them. We want to call the new station Chinatown Station.”

Rose Pak was a controversial personality in Chinatown and a political powerhouse in San Francisco for over three decades. Since her passing, San Francisco city supervisors’ repeated efforts to name the new Chinatown subway station after her have been met with fierce objections from many local groups.

The most vocal objection has come from the Chinatown Merchants Association, Falun Gong practitioners, the Six Companies and others. Many cite Rose Pak’s relationship with the Chinese Communist Party, ill-begotten political power, and negative influence on the community as the main reasons for not adding her moniker to the station.

The San Francisco Municipal Transportation Agency (MTA) is the station naming authority. MTA’s naming policy dictates that all public transit stations must be named after geographical locations. In 2016, MTA ruled against the city supervisor’s resolution to name the subway station “Rose Pak Station” based on that policy, which calmed down a vocal outcry from much of the Chinese community who opposed it.

Earlier this year the city supervisors passed another resolution to name the subway station as “Chinatown Rose Pak Station” to go around the policy restriction. Needless to say, the outcry against the City Hall’s stubborn attempt renewed. Hundreds of oral rebuttals to the naming took place in the last few months both in the city council meetings and MTA board meetings.

At the rally, Eva Lee, advisory board member of the Chinese Merchants Association said: “All public transit stations are to be named after geographical location only, that’s the policy. We want them to follow their policy. That’s all we ask.”

Henry Kalnilo from Chinatown Merchants Association said: “MTA should listen more to the merchants. That’s the folks who make the city rich and make it attractive for people to come to visit us.”

The rally took place at a critical time just before the next MTA’s board meeting to take up the naming issue on Tuesday, Aug. 20. The previous MTA vote deadlocked at 3 to 3 with one board member missing. The new board member has been appointed and will be at the next board meeting. The next MTA board meeting will surely see a record number of people showing up for their courses, perhaps breaking the record of the last such meeting.