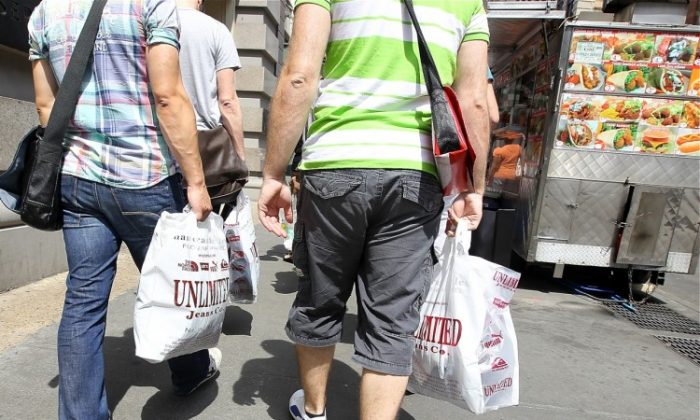 NEW YORK—U.S. retail sales were strong for March, rising for the third consecutive month. The U.S. economy continues to recover on the basis of consumer spending despite high gasoline prices.

The U.S. Department of Commerce said on Monday that retail sales climbed 0.8 percent in March, with virtually every sector experiencing higher sales.

Part of the higher spending could be attributable to the rise in employment, which began in earnest last fall. Consumers, with more jobs, were not shy to spend money at malls and other retailers.

Some analysts feared that higher gasoline prices across the United States would mean that more consumers stayed at home. But just the opposite happened, with an unseasonably warm winter also likely playing a role.

Economists surveyed by Reuters predicted a 2.5 percent annualized growth in GDP based on preliminary first-quarter data.

The U.S. stock market was buoyed by retail sales results, as the Dow Jones Industrial Average gained 71.8 points, or 0.56 percent on Monday.

Apple Inc. was a drag on the Nasdaq Composite, with Apple shares posting their fifth straight day in the red, the longest losing streak for the company since October 2011.

The stock drop may also have been tied to pre-earnings jitters and speculation about a possible decline in Mac computer sales this quarter ahead of a coming Macbook product line refresh. Technical factors may have added fuel, as early morning trading put shares below the $600 level, a likely sell point for many traders. Apple reports earnings on April 24.

While Apple is a key driver for Nasdaq, other technology stocks fared relatively well on Monday. Shares of Intel Corp. and Microsoft Corp. climbed by more than 1 percent.

Shares of ringtone maker Vringo Inc. jumped more than 40 percent on Monday after investor Mark Cuban took a 7.4 percent stake in the company.