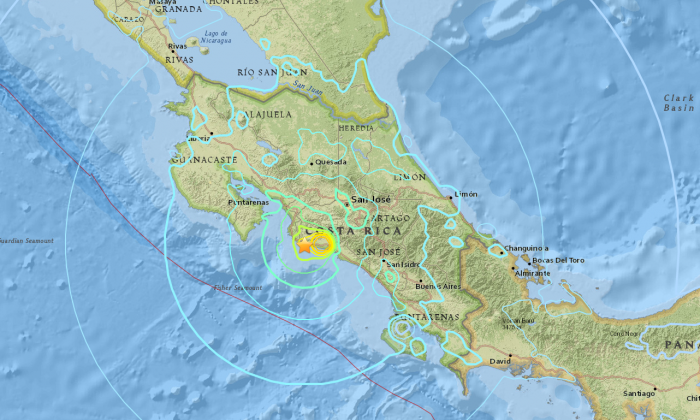 Quake in Costa Rica, No Reports of Major Damage

SAN JOSE—A strong 6.5 magnitude quake struck the Pacific coast of Costa Rica near its capital city San Jose on Sunday night, but there were no initial reports of injuries or significant damage to infrastructure.

Costa Rican President Luis Guillermo Solis said authorities were gathering information and asked residents to remain calm and to be prepared for any possible aftershocks.

A Reuters witness said the quake was felt very briefly in San Jose, but it was enough to startle residents.

“We’re very scared. It’s been years since we felt such a strong one,” said Otto Vargas, a university professor in San Jose, who was home with his family when the shaking started.

The quake hit in a rural area near the popular beach tourism city of Jaco, where there are few tall buildings. It did not trigger a tsunami threat in the Pacific.

Firefighters in Jaco said there were no reports of victims or major damage, but said there were some electrical poles that had come loose and fallen. Social media showed images of supermarkets in Jaco with merchandise strewn across the aisles.

The Costa Rican Red Cross said it had no reports of casualties.

Two pretty powerful earthquakes have struck the world over the past few hours, as a 7.3 magnitude quake shook the Middle East, and a 6.8 earthquake happen just off of the coast of Costa Rica @Vanessa12News pic.twitter.com/Zi6ONgtEvI

Just a few hours earlier, a 7.3 magnitude earthquake struck the border regions of Iran and Iraq, leaving at least 210 dead and 1700 or more injured.