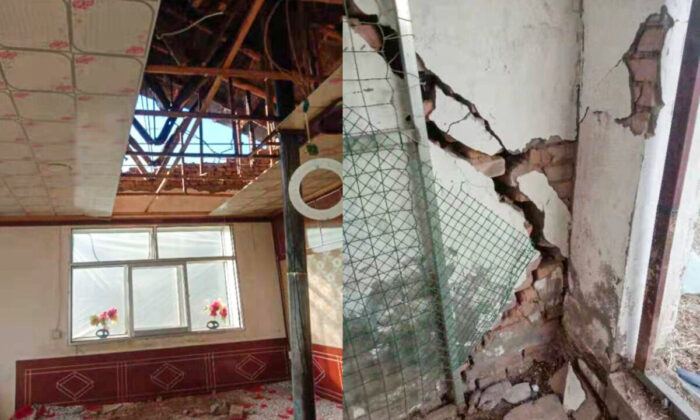 A damaged roof (L) and wall is seen after a 6.9 magnitude earthquake in Menyuan county, in China's northwestern Qinghai Province, on Jan. 8, 2022. (Provided to The Epoch Times)
Asia & Pacific

Four people incurred minor injuries in the Menyuan county of Qinghai Province, officials told a press conference. The four have been treated and released.

The magnitude 6.9 quake struck at 1:45 a.m. in a mountainous part of northwestern Qinghai Province, 12,000 feet (3659 meters) above sea level. It was felt 85 miles (140 kilometers) southeast in Xining, the provincial capital.

Videos shared to Chinese social media showed rows of people coming out of their buildings covered under a blanket. Startled cattle jumped and ran in their pens; furniture and ceiling lamps swayed violently, and homes sustained damage including broken windows and fallen ceiling sections.

“We had no time to put on clothes and just ran for our lives,” Ma Wenxiong (alias), a resident from the town of Qingshizui in Qinghai, told The Epoch Times. They didn’t return indoors for hours despite a subfreezing temperature of below 14 degrees Fahrenheit.

He remembered hearing loud rumbling sounds from the shaking wood-frame house. Luckily for him, though, the newly built house held up during the quake. His neighbors’ home all had cracks on the walls and windows. The walls of one of his neighbor’s homes had tumbled.

“If it went on for 10 more seconds, all the houses would have collapsed,” he said.

As of 2 p.m. on Jan. 8, Ma counted a total of eight tremors following the earthquake.

“We keep our doors open so that we can run out at anytime,” he said.

The same earthquake also shook the nearby Gansu Province, leading to the temporary closure of 16 coal mines.

In Zhangye city, where the earthquake hit, at least 4830 houses saw cracks or crumbled walls, according to local officials, who put the estimated total economic losses at around 81.7 million yuan ($12.8 million).

The province reported deaths of 35 livestock, but said there were no injuries or deaths.

Hong Ning and The Associated Press contributed to this report.