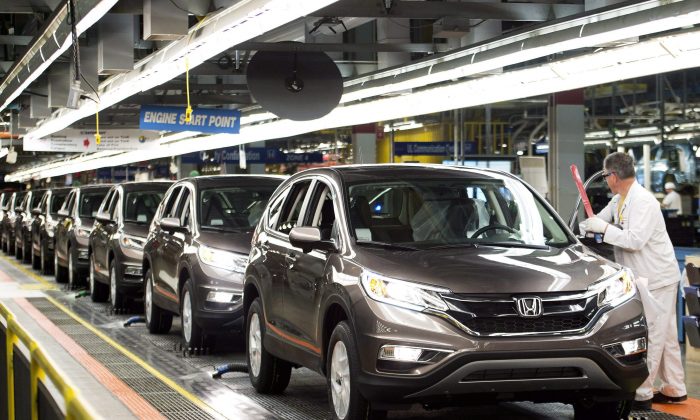 Workers inspect cars on the assembly line at a Honda plant in Alliston, Ontario on March 30, 2015. The transportation sector continues to lead the rise in Canadian manufacturing. (The Canadian Press/Nathan Denette)
Business & Economy

Manufacturing is picking up in Canada led by the transportation sector and buoyed by a weak loonie. It’s another sign the economy will rebound starting with the third quarter as policymakers and economists expect.

Motor vehicles (up 5.6 percent) and motor vehicle parts parts (up 12.1 percent) made up almost two-thirds of the July increase. Canadian auto parts manufacturers supply plants in Canada, Mexico, and the U.S; they are a key component of non-energy exports, which are expected, by policymakers, to be a source of strength in the Canadian economy.

The Canadian dollar will have to remain weak to give manufacturers a fighting chance.
— Krishen Rangasamy, National Bank

The overall picture showed 12 out of 21 industries with higher sales or 63 percent of the manufacturing sector—a broad-based gain.

On July 15, Bank of Canada governor Stephen Poloz called the fall in non-resource exports a “puzzle that merits further study.” The Bank had downgraded growth forecasts, but was optimistic of a modest rebound in the third quarter.

That rebound appears to be underway as the BoC’s Sept. 9 statement mentioned, “exchange rate-sensitive exports are gaining momentum.”

Janzen suggests details of the report point to the manufacturing component of GDP gaining close to 1 percent, “which would mark the strongest increase since December 2014.”

It’s another sign that Canadian manufacturers are starting to see bigger benefits of stronger U.S. growth and a weaker loonie.

The Canadian dollar started the year at nearly US$0.85, but fell to 0.81 after the Bank of Canada caught markets by surprise and cut rates in late January. Hovering around 0.80 for the next three months helped a pickup in these non-energy exports that is now being discussed. The loonie having taken another leg lower to 0.76 should support exports even more, given some time lag.

Inventories rose 1.1 percent in July, mostly due to transportation equipment. The inventory-to-sales ratio stands at 1.4 months, meaning it would take that amount of time to sell the inventory with sales at their current pace. Both figures are at or near their highest levels in five years.

“Sales will have to maintain the pace to put a meaningful dent in the still-bloated inventories,” says National Bank senior economist Krishen Rangasamy in a note. “More importantly, the Canadian dollar will have to remain weak to give manufacturers a fighting chance in a highly competitive marketplace.”

While manufacturing output has picked up in Canada, it still falls far short of the U.S. In terms of output per worker, productivity has risen roughly 20 percent in Canada since 2001, whereas it has gone up roughly 55 percent south of the border.